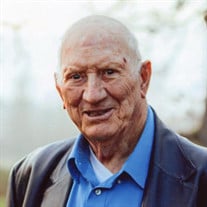 Graveside services for Aaron Nutter will be 2:00 pm Monday, February 1, 2021, at Memorial Hill Cemetery with Rev. Greg Hook officiating. Interment is under the direction of Marshall Funeral Home of Waynoka, LLC. The service will be livestreamed on Marshall Funeral Home Facebook Page. Aaron Richard Nutter, son of the late Albert Fair and Abbie Elizabeth (Cell) Nutter, was born July 14, 1926, at Waynoka, and passed away January 26, 2021, at Enid, at the age of 94 years, 6 months, and 12 days. Aaron was raised in Waynoka along with his ten siblings. He graduated from Waynoka High School and also graduated from Northwestern State College with a Bachelor of Arts Degree in 1965. Aaron served his country proudly in the United States Navy. On July 17, 1944, he was united in marriage to Uva Dell Parks and they had one son, Terry. After he was discharged, he went to work for the Santa Fe Railroad, retiring in 1968. While still working on the railroad, he began preaching and attended the Baptist Theological Seminary in Fort Worth, Texas, graduating in 1969. Aaron had his first full time ministry in Ft. Collins, CO, until 1977. He ministered in Burlington, CO, until he retired in 1986. They moved to Colorado Springs, CO, where he began working full time for the U.S. Postal Service. In 1992, they returned to Waynoka. Aaron ministered part time at the Avard Christian Church and Waynoka Christian Church. He and Dell moved to Enid in 2008. Besides his parents, he was preceded in death by his wife, Dell; four brothers, Alan Nutter, Gerald (Pete) Nutter, Jimmy C Nutter, and Ray Nutter; two sisters, Alberta Bissantz and Francis Geary. Aaron is survived by his son, Terry Nutter and wife, Mary Ellen, of Enid; four grandchildren, Sandra Rowe and husband, Rodney, of Yukon, Bryan Nutter and wife, Tabitha, of Alva, Marc Nutter and wife, Sarah, of Dalhart, Texas, and Lee Nutter and fiance Tawny Dasher, of Aurora, Oregon; three brothers, Don Nutter of Waynoka, Larry Nutter and wife, Jean, of Cresent, and Paul Nutter of Waynoka; one sister, Linda Strohmeyer and husband, Dan, of Waynoka; thirteen great grandchildren; three great great grandchildren; numerous nieces and nephews; many other relatives and friends. In lieu of flowers memorial contributions may be made through the funeral home to the Waynoka Historical Society.

Graveside services for Aaron Nutter will be 2:00 pm Monday, February 1, 2021, at Memorial Hill Cemetery with Rev. Greg Hook officiating. Interment is under the direction of Marshall Funeral Home of Waynoka, LLC. The service will be livestreamed... View Obituary & Service Information

Graveside services for Aaron Nutter will be 2:00 pm Monday, February...

Send flowers to the Nutter family.