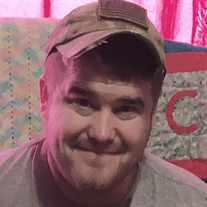 Funeral services for Alexander Richard Kopf will be 11:00 a.m. Monday, June 25, 2018, at the Medicine Lodge First Christian Church with Pastor Dwight Dozier officiating. Interment will be 3:00 p.m. Monday in the Alva Municipal Cemetery under the direction of Marshall Funeral Home of Alva. Alexander Richard Kopf, son of Joseph Roger and Robin Elaine (Knoll) Kopf, was born December 23, 1988, in Fort Ord, California, and passed away June 18, 2018, in Wichita, Kansas, at the age of 29 years, 5 months, and 25 days. Alex attended many schools and was home schooled to complete his high school education. He then attended Baron Community College in Fort Riley, Kansas, and NWOSU in Alva, as well as taking several online classes. He served his country in the National Guard and served a tour in Iraq and a tour in Afghanistan. On March 16, 2013, he was united in marriage to Vanessa Brooke Miranda at Waynoka, Oklahoma. They made their home in Alva until moving to Kiowa, Kansas, two years ago. He was a fiber optic specialist working for a telephone company in Medicine Lodge, Kansas. He and Vanessa enjoyed camping, watching movies, and spending time with Colton and their two dogs. He also spent a lot of time hunting, fishing, building computers, and War Hammer Models with his brother. He also liked to buy guns and help friends and family complete projects. Alex is survived by his wife, Vanessa, of Kiowa, Kansas; his son, Colton Wade Kopf, of Kiowa; his parents, Robin and Joseph Kopf of Alva; one brother, Zachary Kopf of Alva; one sister, Erica Kopf of Jet; his grandparents, Richard and Sharon Knoll of Elk City, and Wendell and Golda Kopf of Pearland, Texas; his parents-in-law, Rebecca and Gregg Miranda, of Alva, and their son, Tanner, of Weatherford; his grandmother-in-law, Shirley Pitts, of Duke, Oklahoma, and grandfather-in-law, Ernest Miranda of Altus; two nephews, Remington and Sterling Robinson of Jet; his close friend, Aaron Todd of Olathe, Kansas; their two dogs, Diamond and Romeo; other relatives and many friends. Memorial contributions may be made through the funeral home to a Education Fund to be set up for their son, Colton.

The family of Alexander Richard Kopf created this Life Tributes page to make it easy to share your memories.

Funeral services for Alexander Richard Kopf will be 11:00 a.m....

Send flowers to the Kopf family.