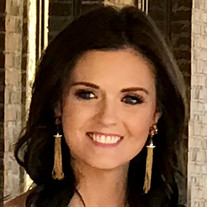 Memorial services for Allison Adair Cunningham Zimmerman will be at 2:00 P.M. Wednesday, February 19, 2020, at Herod Hall Auditorium on the Campus of Northwestern Oklahoma State University with Rev. Jeremy Coolley officiating. There will be a private interment for the family under the direction of Marshall Funeral Home of Alva. Allison Adair Cunningham Zimmerman, daughter of Rick and Janet (Erikson) Cunningham, was born January 10, 1987, at Norman, Oklahoma, and passed away February 14, 2020, at the age of 33 years, 1 month, and 4 days. Allison attended school in Alva and graduated with the Class of 2005 at Alva High School, with highest honors. She developed a wonderful set of friends that lasted a lifetime. Allison participated in Speech and Debate where she earned All-State Honors two years in a row in Dramatic Duet, with her partner Jamie Gourley Peters. She was also in Electric Gold and Mixed and Girls Vocal. She was president of Le Club. She served as a page for Rep. Elmer Maddux at the Oklahoma State Capitol. Allison attended the University of Central Oklahoma for one year, but returned to Northwestern where she finished her Bachelor’s degree in Mass Communication in May of 2009. She was the Senior Class President and a Top Eight Outstanding Senior. Allison was the Co-Anchor for the Best Television Newscast awarded by the Oklahoma Broadcast Association (OBA) and received the Sadie Adwon Memorial Scholarship awarded by the OBA. She represented NWOSU at the George and Donna Nigh Leadership Academy and also as a speaker at Higher Education Day at the Capitol. She was a Northwestern Scholar Ambassador, serving as both President and Vice President. Allison was in Cardinal Key and served as Vice President of Red and Black Scroll. Allison was a Ranger Connector and was first runner-up in the Miss Northwestern Pageant. She was the female lead in the Northwestern play, The Shape of Things. She served as an intern for News Channel 9 in Oklahoma City, and also interned for Congressman Frank Lucas’ Oklahoma City office. Following graduation, Allison was accepted to graduate school at Oklahoma State University. She was a research and teaching assistant for her department. She graduated in May of 2011 with her Master’s degree in Mass Media and Strategic Communications. On May 15, 2010, she was united in marriage to Michael David Zimmerman at the Alva Friends Church. To this union two children, Brooklyn and Zane, were born. She was a college instructor in Mass Communications at NWOSU for the past five and a half years. She was also a member of the Friends Church and Chapter ET of PEO. Allison loved teaching and her students and had a deep faith in God. She especially enjoyed music that helped her through the good times and bad. She loved parties and playing games and watching Dateline. She loved her family, her friends, makeup, watches, jewelry, new shoes, selfies, and Swedish Fish. Her favorite thing was to dance in the kitchen with Brooklyn and Zane. She is survived by her daughter, Brooklyn Claire Zimmerman, and her son, Zane Michael Zimmerman; her parents, Rick and Janet Cunningham; three brothers, Brett Cunningham and wife, Kasey, of Edmond; Tanner Cunningham and wife, Erin, of Oklahoma City; and Drew Cunningham of Alva; three nieces and nephews, Jayden, Cloey, and Lenyx Cunningham; many friends (including the Wolfpack) and other family. In lieu of flowers, memorial contributions may be made through the funeral home to the Northwestern Foundation to establish a scholarship in Allison’s memory. Remembrances may be shared with the family at www.marshallfuneralhomes.com.

Memorial services for Allison Adair Cunningham Zimmerman will be at 2:00 P.M. Wednesday, February 19, 2020, at Herod Hall Auditorium on the Campus of Northwestern Oklahoma State University with Rev. Jeremy Coolley officiating. There will be... View Obituary & Service Information

The family of Allison Adair (Cunningham) Zimmerman created this Life Tributes page to make it easy to share your memories.

Send flowers to the Zimmerman family.