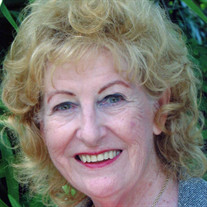 Funeral services for Alma Jean Standers will be 10:30 a.m., Wednesday, April 3, 2019, at the Carmen First United Methodist Church with Rev. Kirk Board officiating. Interment will be in the Carmen City Cemetery under the direction of Wentworth Mortuary, LLC. Alma “Jean” Standers, only child of Truman and Twila (Brown) Warren, was born on Thanksgiving Day, November 28, 1935, on a farm near Billings, Oklahoma, and passed away March 28, 2019, at Clearwater, Kansas, at the age of 83 years and 4 months. She was the last branch on the family tree and was named in memory of her maternal grandmother that had passed away three years prior to her birth. At the age of four, her parents purchased a farm six miles east of Carmen, Oklahoma. The family farmed for several years until she was seven years old. Due to her father’s poor health, they purchased property and moved into Carmen. Her father passed away when she was 14 years old. Jean attended school in Carmen and graduated with the Class of 1953. Upon graduation, Jean moved to Santa Monica, California. During the next two years, she applied to UCLA for a training program to become an x-ray technologist. She graduated from UCLA in 1955 with a degree as a Diagnostic X-ray Technologist. She continued with her x-ray career and obtained her State of California National X-ray Degree plus a Pre-Med and Business Administration Degree. She also obtained a Real Estate License and worked in the real estate field for two years. Jean worked at various hospitals and clinics in the x-ray department and assisted in surgery for 55 years. She met Harry Standers, a law student in 1958, and the two were married in May of 1958 in the Little White Chapel in Las Vegas. They divorced in 1965. Jean was an avid Elvis Presley fan and collected Elvis memorabilia. She traveled to Memphis, Tennessee, 27 times to commemorate the anniversary of his death. She was also an active member of the Jailhouse Rockers of California, an Elvis Presley Fan Club. After retiring from UCLA Medical Center on July 1, 2007, she enjoyed traveling, square dancing, and participating in acting classes for commercials. She was a member of the Carmen First United Methodist Church. Jean was preceded in death by her parents, Truman and Twila Warren. She is survived by her cousins, Leland and Carmen Brown of Fairview, Larry Brown of Helena, Sherilyn and Gary Ward of Clearwater, Kansas, Virginia and Bruce Davis of Houston, Texas; other relatives and many friends. Memorial contributions may be made through the funeral home to the Carmen First United Methodist Church.

Funeral services for Alma Jean Standers will be 10:30 a.m., Wednesday, April 3, 2019, at the Carmen First United Methodist Church with Rev. Kirk Board officiating. Interment will be in the Carmen City Cemetery under the direction of Wentworth... View Obituary & Service Information

The family of Alma "Jean" Standers created this Life Tributes page to make it easy to share your memories.

Send flowers to the Standers family.