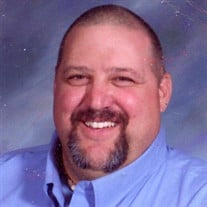 Visitation with family present for Anthony Lovelace will be held on Monday, December 21, 2020 from 9:00 am to noon. The memorial service will then follow at 2:00 pm where Anthony keeps his cattle on the land owned by Judy Trekell-Kirby. A procession to the memorial service location will begin at 1:30 at Marshall Funeral Home. Parking will be done on the road leading to the land. Additionally, visitation to view the body will open up beginning on Saturday, December 19, 2020 and continue through December 21, 2020. Services will be officiated by Brayden Lovelace, assisted by Ashley Youngblood and Lindsey Carson. Todd Lovelace, Brayden Lovelace, Brenden Smith, Trenten Smith, John Carson, Kevin Wiles, Jeff Davenport, Tyler Nighswonger, Clinton Nighswonger, Tom Nighswonger, Ben McKenzie, Dusty Yauk, Jason Busche, Sam Jones and Terry Benson will serve as honorary pall bearers. The service will be live streamed over Marshall Funeral Home facebook page. Anthony Lovelace was born on May 25, 1970, in Oklahoma City, Oklahoma to Sandy and Michael Lovelace and died on December 13, 2020, at Integris Bass Hospital in Enid, Oklahoma. He graduated from Mustang High in Mustang, Oklahoma. He then went to Northwestern Oklahoma State University where he played football as an offensive lineman all four years. He graduated from Northwestern Oklahoma State University in 1992 with a Bachelor’s Degree in Ag Business. Anthony continued his education at Oklahoma State University where he obtained his Master’s Degree in Animal Science. Following his graduate work, Anthony began working as a soil conservationist at USDA- Natural Resources Conservation Service for several years. He then began his most impactful work. He became a teacher. He taught science and history at Waynoka and Freedom, and taught history in Alva. The lives that he touched and truly made a difference include so very many blessed students who were under his charge. He has maintained relationships with many of his students even into their adult life. Countless stories from those students of his passion for life could be contained in a large volumed book. He knew the importance of relationships and truly changed lives. Throughout his work life he has always had a small herd of cattle. Additionally, he has always bought and sold antique equipment under the “company title” of Lovelace Implement where he boasted about becoming a self-made “hundredaire”. In the summers, his favorite job included wheat harvesting. When the combines would start rolling into Alva, he would begin to get “itchy feet” to start working in the fields. Some of his greatest moments were looking out over the field and appreciating the grandeur of God’s land. He captured many of those moments in his photos, many of which have been featured in various publications. Anthony also wrote articles for several tractor enthusiast magazines and was an amazing photographer. He had the amazing ability to paint a picture with words and capture photos that told incredible stories without words. He was able to place you exactly in the moments he was describing. One could almost hear his voice as the words were scanned. His true love for farming, ranching, traveling, and experiencing a time that has past came out boldly as he penned words to the page. It is known that his “fans” will truly miss his articles. He was Anthony to some, Tony to some, Toe to some, Papa Bear to some and P.P. to his grandchildren. He consistently stated that he was born in the wrong era because his historical interests were vast, and he was captivated by the life led by those who understood the simpler things in life. His love for baseball was extensive. His mood was often dictated by how the Phillies were doing in their season. He was a collector of old things and loved the moments he was able to sit on his porch swing and “swing his cares away.” He read all the time. When he loaded up to go anywhere, there was always reading material included in his packing. He loved AM radio and there are no words to describe how much he loved Pogo and Nani, his border collie and shih tzu. They too are featured in many of the articles he wrote. In fact, he referred to them as being famous. Toe was a person of exceptional character. He was honest, straightforward and usually right (in his mind). He was one of the smartest people known. His view of life was inspiring and unique. He had a memory unmatched and never met a stranger. He loved deeply and had a heart as big as the universe. Sometimes it was hidden in the way he presented his no nonsense solutions to life’s common problems, but anyone who knew him knew he was a giver. He loved his family so much. We loved him more than he will ever know. He had such a presence and forever more there will always be a bit of life missing in the places and gatherings where he frequented. He was the life of ALL of our family gatherings. His quick wit and vast knowledge of all things made him pretty much the expert in all discussions! He always made us laugh. Anthony is survived by his wife, Sherrye Lovelace of Alva, and his daughter and son-in-law, John and Lindsey Carson and their three children, Kadence, Addie, and Eli of Williamsburg, Virginia and his sons Brenden Smith and Trenten Smith of Portales, New Mexico. Additionally, he is survived by his mother, Sandra Lovelace of Mustang, Oklahoma, his sister and brother-in-law, Traci and Jeff Davenport of Paden, Oklahoma, his brother and sister-in-law, Todd and Marsha Lovelace of Mustang, Oklahoma, his niece, Ashley Youngblood of Oklahoma City, Oklahoma, his niece and nephew Syndi and Ben McKenzie of Oklahoma City, his Nephew Brayden Lovelace of Mustang, Oklahoma, his niece Kyla Lovelace of Mustang, Oklahoma, as well as lifelong friend Kevin Wiles of Mustang, Oklahoma and many other friends and family members.

Visitation with family present for Anthony Lovelace will be held on Monday, December 21, 2020 from 9:00 am to noon. The memorial service will then follow at 2:00 pm where Anthony keeps his cattle on the land owned by Judy Trekell-Kirby. A... View Obituary & Service Information

The family of Anthony Lovelace created this Life Tributes page to make it easy to share your memories.

Visitation with family present for Anthony Lovelace will be held...

Send flowers to the Lovelace family.