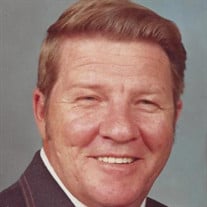 Graveside services for Archie Franklin Farrand will be 2:00 p.m. Friday, August 13, 2021, at the Waynoka Municipal Cemetery with Tim Crowe officiating. Viewing and interment will be under the direction of Marshall Funeral Home of Waynoka, LLC. Archie Franklin Farrand, son of the late Orville Franklin and Dora Marie (Thomas) Farrand was born July 07, 1937, near Quinlan, Oklahoma, and passed away August 09, 2021, at Madill, Oklahoma, at the age of 84 years, 1 month and 2 days. He was a resident of the Brookside Nursing Home in Madill, Oklahoma. Archie attended school in the Quinlan School System and entered military service with the United States Marine Corp from which he was Honorably discharged. On September 04, 1961, he was united in marriage to Shirley Ann Case at Fairview, Oklahoma. He was employed in the Fairview, Newkirk and Blackwell, Oklahoma, areas at various manual labor jobs. In 1968, he and Shirley moved to Liberal, Kansas, where he was employed in the natural gas fields as a mud and drilling engineer. After retirement from the oilfield Archie was an independent truck driver and drove semi-trucks on long haul trips. In 2002, he and Shirley moved to the Canton Lake area and resided in Longdale, Oklahoma. After Shirley’s death in March 2012, Archie moved to the Texoma Lake area and resided at Bridgeview Resort near Little City, Oklahoma. Archie loved fishing, hunting and camping. He also enjoyed OSU football which made for interesting conversation with the rest of the family as they were all OU fans. Besides his parents and wife, he was preceded in death by brother, John Robert Farrand, sister, Mary Jane Hammans and son, Archie Ray Farrand. Archie is survived by four sons, Tim Crowe and wife, Marge, of Temple, Texas, David Ray Farrand and wife, Peggy, of Inola, Oklahoma, Arthur B. Farrand of Garden City, Kansas, Ricky Dean Farrand and wife, Susan, of Tyrone, Oklahoma, and one daughter-in-law, Connie Farrand of Enid, Oklahoma; two brothers, Gene Farrand and Everett Farrand; one sister, Carol Ann Guffey; his sisters-in-law, Lorraine Case and Saundra Case; and his brothers-in-law, Earl Campbell and George Hammans. Archie is also survived by twelve grandchildren and numerous great grandchildren, other relatives and most of all friends. Memorial contributions may be made through the funeral home to Shriner’s Hospital.

Graveside services for Archie Franklin Farrand will be 2:00 p.m. Friday, August 13, 2021, at the Waynoka Municipal Cemetery with Tim Crowe officiating. Viewing and interment will be under the direction of Marshall Funeral Home of Waynoka, LLC. Archie... View Obituary & Service Information

The family of Archie Farrand created this Life Tributes page to make it easy to share your memories.

Graveside services for Archie Franklin Farrand will be 2:00 p.m....

Send flowers to the Farrand family.