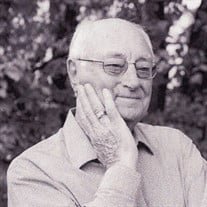 Funeral services for Arthur Wesley “Wes” Smith will be 11:00 a.m. Saturday, February 19, 2022, at Marshall Funeral Home Chapel in Alva with Reverend Rod Rieger officiating. Interment will be in the Byron Amorita Cemetery under the direction of Marshall Funeral Home of Alva. There will be visitation with the family at Marshall Funeral Home from 4:00 p.m. until 6:00 p.m. on Friday, February 18, 2022. Arthur Wesley “Wes” Smith, son of the late Arthur Homer and Florence Elizabeth (Clutter) Smith, was born July 13, 1930, in Cherokee, Oklahoma, and passed away February 14, 2022, in Alva, Oklahoma, at the age of 91 years, 7 months, and 1 day. Wes graduated from Amorita High School with the Class of 1948. He attended NWOSU his freshman year before transferring to Oklahoma State University. While he was a junior at OSU and active in ROTC, he was called to active duty in the U. S. Air Force during the Korean Conflict. He spent his seven years of active duty at Vance Air Base in Enid. After his military service, he was employed at Boeing Aircraft in Wichita. In 1953 he returned to the family farm. In 1954 he married Beth Christensen Clark in Byron where they began farming and ranching. Kim and Mark were born while they were still on the farm. While raising kids Wesley spent a fortune on vehicles. One January he was going to buy the Hitchin’ Post in Hardtner and burn it down. The Smith’s always had a good time at family gatherings. The Barber County Shrine Club also held lots of fun memories and parading for Wes and Beth. In 1964 Wes and Beth purchased Lewis Chevrolet in Kiowa becoming Wes Smith Chevrolet Buick after working for Roscoe Lewis selling cars. Wes loved “The Art of the Deal”! Selling was his passion and love, always ready for the challenge. He sold Wes Smith Chevrolet in 1976 and went back to farming and ranching until his retirement. Of course the salesman in him never quit. He sold cars for several local dealerships, recreational homes in Bentonville, Arkansas, and his own business, Wes Smith Sales in Kiowa. He loved for little old ladies to ask him to shop or sell their vehicles. They retired in Alva to look after his father and his wife, Bubbles. He and Beth enjoyed taking their antique cars parading. Wes never met a stranger, always a talker and a ladies man. He and beth enjoyed 68 years together on life’s adventures, highs and lows. Wes was the repair man for the family and the Alva Cherokee Strip Museum. He enjoyed woodworking. When the museum needed something, Wes was the go to go to guy, making cotton candy, popping popcorn, and even portraying Franklin Roosevelt. Art would have rolled over in his grave. Wes spent his last few months at Share Convalescent Home, still teasing all the girls that cared for him. He slipped peacefully into God’s arms on Valentines Day! We’re sure the reunion with Jesus, his parents, brothers and buddies has been awesome!!! Besides his parents, he was preceded in death by two brothers, Wilford Smith and wife, Sonnie, and Larry Smith; and two grandchildren, Jacob Wesley Smith and Lauren Brogan. Wes is survived by his wife, Beth, of Alva; one son, Mark Wesley Smith and wife, Cara, of Amorita; one daughter, Kim Sanders and husband, Frank, of Enid; eight grandchildren, Tiffani Ford and husband, Steve, of Elgin, Krystal Lovinggood and Jessica, of Choctaw, Morgan McDonald and husband, Aaron, of Mustang, Samantha Siler and husband, Justin, of Stillwater, Nicole Briggs and husband, Cody, of Alva, Ky Smith of Amorita, Ashley Lee of Cincinnati, Ohio, and Clinton Brogan and wife, Angie, of Manchester, Iowa; 10 great grandchildren; 1 great-great grandchild; other relatives and friends. Memorial contributions may be made through the funeral home to Cosmos Masonic Lodge #278 in Kiowa or the Cherokee Strip Museum in Alva.

Funeral services for Arthur Wesley &#8220;Wes&#8221; Smith will be 11:00 a.m. Saturday, February 19, 2022, at Marshall Funeral Home Chapel in Alva with Reverend Rod Rieger officiating. Interment will be in the Byron Amorita Cemetery under the... View Obituary & Service Information