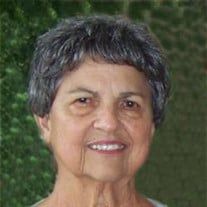 Funeral services for Barbara Brady will be 2:00 p.m. Saturday, January 7, 2017, at the First Christian Church (Disciples of Christ) with Rev. Ron Pingleton officiating. Arrangements are under the direction of Marshall Funeral Home of Alva. Barbara Ann Baltz, the youngest of nine children, was born January 26, 1934, on a farm near Lambert, Oklahoma, and passed away Tuesday, January 3, 2017, at the age of 82 years, 11 months, and 8 days. At age 5, she moved to Cherokee, Oklahoma, with her parents Louis Leroy Baltz and Laura Elvira (Oringderff) Baltz. Barbara attended Cherokee Public Schools and graduated in 1952. During this time, Barbara worked for the movie theater in concessions and ticket sales, as well as Bell Telephone Company as an operator. Barbara was also an avid swimmer. On August 2, 1952, Barbara married Ronald Clay Brady. Shortly after their marriage the couple moved to San Antonio, Texas, where Ronald served in the U.S. Army. After Brady’s discharge from the Army, the couple settled on a farm west of Cherokee where they raised their three daughters, Ronda, LeAnn, and Becky. In 1964, the family moved to a farm east of Alva. While Ronald farmed, Barbara maintained the home, managing the book work for their farming operation, cooking for hired hands, and rearing their girls. During this time, Barbara was an active member of the First Christian Church in Alva and was involved in both CWF (Christian Women’s Fellowship) and Golden Circle Club. The couple also enjoyed a close-knit farming community, often sharing in potluck dinners and evenings of playing cards and marbles. In 1976, the couple moved into their home in Alva, where Ronald still resides. In 2014, Barbara moved to Beadles Nursing Home. Besides her parents, she was preceded in death by eight siblings and their spouses. Barbara is survived by her husband, Ronald Clay Brady; three daughters, Ronda and Jim Martin of Newkirk, LeAnn and Jennie Brady of Oklahoma City, and Becky and Oswaldo Leon of Centennial, Colorado; nine grandchildren, Jill, Jessica, Amy, Clayton, Jordan, Evan, Cori, Allison, and Anna; twelve great grandchildren; other relatives and friends. Memorial contributions may be made through the funeral home to Beadles Nursing Home Activity Fund or the First Christian Church Foyer Fund.

Funeral services for Barbara Brady will be 2:00 p.m. Saturday, January 7, 2017, at the First Christian Church (Disciples of Christ) with Rev. Ron Pingleton officiating. Arrangements are under the direction of Marshall Funeral Home of Alva. Barbara... View Obituary & Service Information

The family of Barbara Ann Brady created this Life Tributes page to make it easy to share your memories.

Funeral services for Barbara Brady will be 2:00 p.m. Saturday,...

Send flowers to the Brady family.