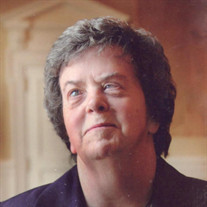 A visitation will be held 10:00 a.m. to 12:00 p.m., Saturday, May 8, 2021 at Marshall Funeral Home Chapel. Portions of the visitation will be livestreamed on Marshall Funeral Home Facebook page. Barbara Kay (Thornberry) Duncan, daughter of the late Wyveta (Rader) Calhoun, was born February 11, 1946, in Cherokee, Oklahoma, and passed away February, 17, 2021, in Little Rock, Arkansas, at the age of 75 years and 6 days. Barbara attended Alva Schools through the sixth grade and then with encouragement from Lee Haley, she attended the Muskogee School for the Blind where she graduated in 1963. After she graduated she returned to Alva and attended Northwestern where she earned her Bachelor’s Degree in Sociology and Speech, graduating in 1969. After graduating, Barbara moved to Little Rock, Arkansas, and went to work for the Arkansas Governor’s office. While working in the Governor’s office she attended the University of Arkansas and earned her Master’s in Social Work. Barbara married Adren Duncan December 15, 1978, in Little Rock where they made their home. She worked in the Governor’s office for 37 years, retiring January 8, 2016. Barbara never let the fact she was blind hold her back from doing anything she wanted to do. She was a member of the Village Creek Baptist Church in Little Rock, served on the Arkansas Council of the Blind, and was a member of the Cardinal Key National Honor Sorority. She and Adren loved to travel and attend concerts. Barbara always tried to come home to Alva once a year to visit family and friends. She was preceded in death by her mother, Wyveta. Barbara is survived by her husband, Adren, of Little Rock; cousins, Don and Audrey Rader of Oklahoma City and Sherry and Melvin Evans of Alva; a very special friend, Rita Miller of Alva; and other relatives and friends. Contributions may be made in her memory through the funeral home to the Fairview Cemetery north of Alva.

The family of Barbara Kay Duncan created this Life Tributes page to make it easy to share your memories.

Send flowers to the Duncan family.