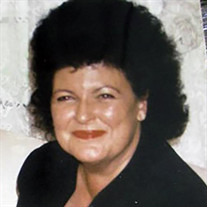 Funeral services for Barbara Ann (Mitchell) Struckle will be 2:00 p.m. Tuesday, September 15, 2020, at the Alva First United Methodist Church with Pastor Katie Hill officiating. Interment will be in the Alva Municipal Cemetery under the direction of Marshall Funeral Home of Alva. There will be a visitation with the family at Marshall Funeral Home Monday evening from 5:30 to 7:00 p.m. Barbara Ann (Mitchell) Struckle was born on October 17, 1937 in Blackwell, Oklahoma to Floyd Richard Mitchell and Velva Marie (Collyar) Mitchell. After spending time growing up in Blackwell, Enid and Woodward, Oklahoma, her family moved to Ardmore, Oklahoma, where she attended high school and graduated in 1955. She was active in the band, speech and drama. Upon graduation from high school, she enrolled at East Central State College where she obtained her degree in Elementary Education in 1958. While attending college, she met her husband of 58 years, Joe Jack Struckle. They were married in 1958, and she started her first teaching job in Seminole, Oklahoma shortly, thereafter. Barbara and Joe spent several years in Ponca City, where she taught 1st Grade at Washington Elementary School. She gave up teaching with the birth of her first son, Joe Jay in 1963. Her second son, Jeffrey Jack, arrived in 1967. In 1968, the family moved to Alva, Oklahoma. Ten years later, she obtained her Master’s Degree in Education at Northwestern Oklahoma State University. Besides relishing time with her family, Barbara enjoyed creative writing, reading, traveling and was a master at social event planning and activities. She was active in the local Enid PEO chapter and was a huge supporter of children’s charities, including St. Jude Hospital. Upon Joe’s retirement in 2000, they retired to Enid, Oklahoma and eventually moved to Edmond, Oklahoma. Barbara was preceded in death by her husband, Joe; her parents, Floyd Mitchell and Velva Marie (Collyar) Mitchell and Velma Waunita (Jo)( Murray) Mitchell. She is survived by a son, Joe Jay Struckle, of El Reno, Oklahoma, and a son and daughter-in-law, Jeffrey Jack Struckle and Sharon Christine Struckle, of Overland Park Kansas; a granddaughter, Katelyn Christine Struckle, of Overland Park, Kansas ; and a grandson, Carter Ryan Struckle, of Overland Park Kansas, along with many other friends and relatives, who will all miss her. In lieu of flowers, the family would request that donations be made in the name of the Northwestern Oklahoma State University Foundation in Alva, Oklahoma and/or St. Jude Children’s Research Hospital in Memphis, Tennessee.

Funeral services for Barbara Ann (Mitchell) Struckle will be 2:00 p.m. Tuesday, September 15, 2020, at the Alva First United Methodist Church with Pastor Katie Hill officiating. Interment will be in the Alva Municipal Cemetery under the direction... View Obituary & Service Information

The family of Barbara Ann Struckle created this Life Tributes page to make it easy to share your memories.

Funeral services for Barbara Ann (Mitchell) Struckle will be...

Send flowers to the Struckle family.