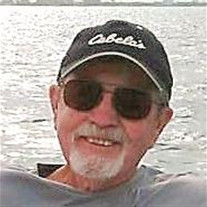 Funeral services for Dr. Ben Harrison “Mac” McKinley will be 3:00 p.m. Saturday, April 13, 2019, at the Alva First United Methodist Church with Rev. Ron Pingelton officiating. There will be a visitation from 6:00 to 8:00 p.m. April 12 at Marshall Funeral Home. Interment will be in the Alva Municipal Cemetery under the direction of Marshall Funeral Home of Alva. Ben Harrison “Mac” McKinley, son of the late Benjamin Harrison and Inez Catherine (Young) McKinley,was born September 26, 1936 in Ashland, Kansas, and passed away April 7, 2019, in Oklahoma City,Oklahoma, at the age of 82 years, 6 months, and 11 days. After Mac graduated from Ashland High School in 1954 he attended Kansas State University for a semester until his father passed away suddenly and he had to return to manage the family ranch in Northwest Woods County. On December 31, 1965, he was united in marriage to Jerrie Sue Pickens at Lyons, Kansas. After they settled in at the ranch, in 1966, Mac decided to renew his goal to become a Veterinarian. He moved his new family to Alva where he attended Northwestern Oklahoma State University for two years before being accepted into the Veterinary Medicine School at Oklahoma State University, in Stillwater. After receiving his Doctor of Veterinary Medicine Degree in the spring of 1972, he returned to Alva where he built Ridgeview Veterinary Clinic. Later, Terry Lohmann started working at Ridgeview. Terry went to OSU and obtained his Doctor of Veterinary Medicine Degree, then returned to become a partner with Mac until Mac retired after a long and successful career in Veterinary Medicine. Mac was a member of the First United Methodist Church and attended the First Christian Church for the last few years. He was a big supporter of the Alva Goldbugs, the Northwestern Rangers, and the Oklahoma State Cowboys. He was a member of Kiwanis, the Quarterback Club, the Rowdy Rangers, and a charter member of the Ranger Ski Team. He enjoyed fishing, boating, snow skiing with family and the Ranger Ski Team, traveling with his family to Alaska, Canada, Hawaii, Belize, St. Thomas and many other of his favorite places in the Lower 48 states. He was known for his dry humor, quick wit and his love for the Alva community. Besides his parents, he was preceded in death by his wife, Jerrie; and one sister, Shirley Talbot. Mac is survived by three children, Daniel Kevin Ward and wife, Kay, of San Antonio, Texas, Susan McKinley Jungling and husband, Mike, of Olathe, Kansas, and Sarah McKinley Christensen and husband, Brian, of Medford, Oregon; and two sisters, Barbara Voss and husband, George, of Dodge City, Kansas, and Sharon Partridge of Wichita, Kansas. Also surviving are ten grandchildren, Holden Chandler Hostetler and wife, Stephanie Drenka, of Dallas, Texas, Jordan Jay Hostetler of Dallas, Texas, Jordan McKinley Bentley and husband, Michael, of Knob Noster, Missouri, Taryn Leigh Graves of Olathe, Kansas, Madison Sue Christensen of Medford, Oregon, Steven McKinley Christensen of Medford, Oregon, Brandon Alex Jungling and fiancé, Emily Argotsinger, of Olathe, Kansas, Zachery Tyler Jungling of Olathe, Katelynn Nicole Jungling of Raymore, Missouri, and Collin Reece Jungling of Raymore, Missouri; other relatives and many friends. In lieu of flowers, the family requests memorial contributions may be made through the funeral home to the Oklahoma Medical Research Foundation for Cancer Research.

The family of Ben Harrison "Mac" McKinley created this Life Tributes page to make it easy to share your memories.

Funeral services for Dr. Ben Harrison “Mac” McKinley will be...

Send flowers to the McKinley family.