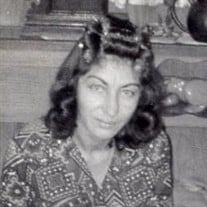 Graveside services for Bertha Jean Truesdale will be 10:00 a.m. Tuesday, June 26, 2018, at the Memorial Hill Cemetery with Bill David Walker officiating. Interment is under the direction of Marshall Funeral Home of Alva. Bertha Jean Truesdale, daughter of the late John Northern and Mary Etta Tedford, was born October 30, 1935, in Russellville, Arkansas, and passed away June 22, 2018, in Waynoka, Oklahoma, at the age of 82 years, 7 months, and 22 days. Bertha attended school in Gore, Oklahoma. On March 18, 1955, she was united in marriage to Loyce Russell Truesdale in Muskogee. They lived several places before moving to Waynoka in 1972. She was baptized in the Nazarene Church in Henryetta. She was a member of the American Legion Ladies Auxiliary. She won many ribbons at the county fair with her talent in quilting, crocheting, and embroidering. Bertha was also an excellent cook. Besides her parents, she was preceded in death by seven siblings, Juanita Fuller, Alvin Tedford, Lee Tedford, Eugene Tedford, Dori Curry, Thelma Pierce, and Albert Tedford. Bertha is survived by her husband, Russell, of Waynoka; three sons, Wes Truesdale and wife, Kerri, of Waynoka, Lance Truesdale, of Waynoka, and Johnny Truesdale of Freedom; two sisters, Letha Dean of Trinidad, Colorado, and Betty Dean of Oklahoma City; six grandchildren, Scott and Cherie Truesdale, Wade and Sara Truesdale, Jeana and Brad Kraft, Alex and Ryan Dedmon, Madison Truesdale, and Max and Chase Porter; nine great-grandchildren, Savannah, Lexi, Jackson, Sadie, Cooper, and Jagger Truesdale, Emrie Kraft, Pazelee Dedmon, and Baby Roman; other relatives and friends. Memorial contributions may be made through the funeral home to the Waynoka American Legion.

The family of Bertha Jean Truesdale created this Life Tributes page to make it easy to share your memories.

Graveside services for Bertha Jean Truesdale will be 10:00 a.m....

Send flowers to the Truesdale family.