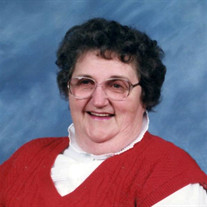 Funeral services for Bettie Mae Herren will be 2:00 p.m. Saturday, October 20, 2018, at the Alva First Baptist Church with Derrick Thomas officiating. Interment will be in the Byron-Amorita Cemetery under the direction of Marshall Funeral Home of Alva. Bettie Mae Herren, daughter of the late Noble I. and Nora Delta (Shepler) Arb, was born June 8, 1935, in Alva, Oklahoma, and passed away October 18, 2018, at Alva, Oklahoma, at the age of 83 years, 4 months, and 10 days. Bettie attended Alva Schools through the 10th grade, then graduated from Avard High School. During her senior year, she worked at the Avard Café. On November 26, 1959, she was united in marriage to Clifford L. Herren at Alva, Oklahoma. She worked in a school cafeteria in Arkansas and various other jobs before moving back to Alva where she sold Avon for a time and worked at Beadles Nursing Home,. She was a member of the First Baptist Church where she was active in several women’s groups and helped in the nursery. She enjoyed sewing, reading, gardening, and canning. Besides her parents, she was preceded in death by three daughters, Veronica Mae Herren, Kathy Ellen Herren, and Elizabeth Jane Herren; three brothers, Frank Arb, Bob Arb, and Oscar Arb; and one sister, Erma Murray. Bettie is survived by her husband, Clifford, of Alva; three children, Roy Lee Herren and wife, Rosemary, of Alva, Marilyn Kay Clark and husband, Verne, of Amorita, and Terry Ray Herren and wife, Stefanie, of Yoder, Colorado; one brother, Cecil Arb and wife, Darla, of Phoenix, Arizona; one sister, Alice Stoskopf and husband, Dwight, of Great Bend, Kansas; eight grandchildren, Jeremy Meng and wife, Leslie Powers-Meng of Fort Walton Beach, Florida, Shayla Herren of Oklahoma City, Kristen Herren of Yoder, Colorado, Keyra Clark of Alva, Lexi Clark of Amorita, Katie Herren of Yoder, Colorado, Brenner Clark of Amorita, Keaira Herren of Yoder, Colorado; two great grandchildren, Foster and Bailey Meng of Fort Walton Beach, Florida; other relatives and friends. Memorial contributions may be made through the funeral home to the Alva First Baptist Church.

Funeral services for Bettie Mae Herren will be 2:00 p.m. Saturday, October 20, 2018, at the Alva First Baptist Church with Derrick Thomas officiating. Interment will be in the Byron-Amorita Cemetery under the direction of Marshall Funeral Home... View Obituary & Service Information

The family of Bettie Mae Herren created this Life Tributes page to make it easy to share your memories.

Funeral services for Bettie Mae Herren will be 2:00 p.m. Saturday,...

Send flowers to the Herren family.