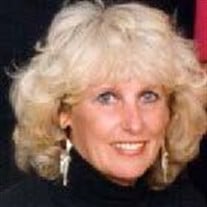 Funeral services for Betty Carol Coffey will be on 10:00 Saturday, February, 11, 2017 at the Waynoka First United Methodist Church, with Stephen Davis officiating. Interment will be in the Waynoka Municipal Cemetery under the direction of Marshall Funeral Home of Waynoka, LLC. Betty Carol “BC” (Moore) Coffey, age 72, died February 9, 2017 at Mercy Hospital in Oklahoma City, Oklahoma. Betty Carol, known as BC to her friends and Woo to her grandkids, was the second of four children and only daughter of Garold Jay Moore (1914-1966) and Vera Laverne (Atkinson) Moore (1917-1997). She was born in Genoa, Nebraska on August 11, 1944. BC grew up in Waynoka, Oklahoma attending grades 1-12 and and graduating from Waynoka High School in 1962. She was christened and baptized in the Methodist Church of Waynoka and a member of the MYF. She was proud of member of the Waynoka girls basketball team, a cheerleader and member of the yearbook staff. She married Edward Lewis Moore, Jr in 1962 and moved to Norman, Oklahoma and subsequently to Cherokee, Oklahoma. They had two children, Jay Lewis and Stephanie Diane. BC moved to Oklahoma City in 1974 with Jay and Stephanie. BC worked in many different jobs in Oklahoma City, spending the majority of her career as a Legal Secretary and Membership Director at the Greens Country Club. She married John Cornelius Coffey, Jr September 3, 1992 and moved to Edmond, Oklahoma. She traveled with John and spent countless hours with her grandchildren. She was dedicated to her family history and became one of the family genealogist. She has written and published several family pictorial family history books. Besides her parents, BC is preceded in death by her brothers, Robert Marion Moore (1941-2013) and Garold Jay “Gary” Moore II (1953- 2015). BC is survived by her loving and loyal husband, John Coffey, of Edmond; her children Jay Moore, of Edmond; Stephanie Moore Cricklin of Oklahoma City, step-children John Coffey of Punta Gorda, FL; David Coffey of Highlands,CA; Maria Coffey of Oklahoma City, Kenneth Coffey of Oklahoma City; Scott Johnson of Idabel; Lea Johnson Grimland of Houston, TX; and Matthew Johnson of Bixby. And also surviving are one brother, Dennis James Moore, Edmond; and a host of nieces, nephews blended grandchildren. Memorial contributions may be made through the funeral home to the Waynoka First United Methodist Church.

Funeral services for Betty Carol Coffey will be on 10:00 Saturday, February, 11, 2017 at the Waynoka First United Methodist Church, with Stephen Davis officiating. Interment will be in the Waynoka Municipal Cemetery under the direction of Marshall... View Obituary & Service Information

The family of Betty Carol Coffey created this Life Tributes page to make it easy to share your memories.

Funeral services for Betty Carol Coffey will be on 10:00 Saturday,...

Send flowers to the Coffey family.