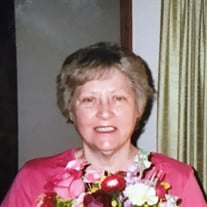 Funeral services for Betty LaVona Means will be 1:30 p.m. Thursday, December 8, 2016, at the Carmen United Methodist Church with Rev. John Bizzell and Rev. Dave Keller officiating. Interment will be in the Pleasant Ridge Cemetery under the direction of Wentworth Mortuary, LLC. Betty LaVona Means, daughter of the late Charles E. and Frances E. (Bradford) Newlin, was born January 18, 1944, in Alva, Oklahoma, and passed away December 4, 2016, in Enid, Oklahoma, at the age of 72 years, 10 months, and 26 days. Betty graduated from Dacoma High School and obtained her Bachelor of Science degree from Northwestern Oklahoma State University. She taught English and Home Economics at Carmen from 1967 to 1970. On November 2, 1963, she was united in marriage to Terry Gene Means at Dacoma. They lived in Carmen for 53 years. During the summers you would often see Betty packing lunches to take to the field where her guys were working. She loved her sisters and friends. They all like to keep one another informed of what was going on. That involved calling one another several times per day. Betty loved homemaking. She always had something good in the making to eat. She was always willing to make a salad or dessert when called on for funeral dinners. Betty was a member of the Dacoma Church of God. She was instrumental in starting Children’s Church and taught Sunday School when her children were small. She loved cooking and basketball games. Her kids were her life. She followed Kevin through sports and FFA, going to all of his livestock shows through highschool. She followed all of Kayli’s musical and sports events, even going as far as helping her sister, Tava, assisting the refs in a few calls. Besides her parents, she was preceded in death by her brother, Charles M. Newlin; two sisters, Tava Bontrager and an infant; one nephew, Greg Newlin; and her father-in-law, Eugene Means. Betty is survived by her husband, Terry, of Carmen; one son, Kevin Means of Carmen; one daughter, Kayli Means of Enid; one sister, Sue Lord and husband, Paul, of Woodward; her mother-in-law, Rachel Means of Enid; her brother-in-law, Steve Bontrager of Cherokee; her sister-in-law, Wanona Newlin of Alva; other relatives and friends. Memorial contributions may be made through the funeral home to the American Diabetes Association.

Funeral services for Betty LaVona Means will be 1:30 p.m. Thursday, December 8, 2016, at the Carmen United Methodist Church with Rev. John Bizzell and Rev. Dave Keller officiating. Interment will be in the Pleasant Ridge Cemetery under the... View Obituary & Service Information

The family of Betty LaVona Means created this Life Tributes page to make it easy to share your memories.

Funeral services for Betty LaVona Means will be 1:30 p.m. Thursday,...

Send flowers to the Means family.