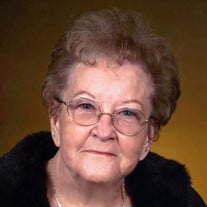 Memorial services for Betty Lou Sewell will be 10:00 a.m. Saturday, November 26, 2016, with Jack Sappenfield officiating. She was cremated at her request under the direction of Marshall Funeral Home of Alva. Betty Lou (Meyers) Sewell was born January 4, 1925, to Dr. James Weaver Meyers and Veva Adna (Spears) Meyers in Hendley, Nebraska, and passed away November 23, 2016, in Alva, Oklahoma. At the age of 12, she and her family moved to Gardena, California, where she graduated from high school. On September 25, 1942, she married J. Q. Sewell, Jr., and to this union three children were born, Larry Wayne, Lynda Lou and Dina Sue. Betty accepted Jesus as her Savior at the age of 6, and served the Lord in many different ways, but cooking was her gift. She and J.Q. had the gift of hospitality and opened their home to missionaries and different groups that came by. Betty graduated as a Licensed Vocational Nurse from nursing school in Amarillo, Texas, in 1964. She worked at Cimarron County Hospital in Boise City, Oklahoma, and at the hospital in Cherokee, Oklahoma. She and J.Q., also worked in the State Mental Health System in California. She retired in 1980 and they moved to Wyoming. She and her husband, moved back to Alva in June of 2003, and he passed away in December of that year. Besides her parents and husband, she was preceded in death by her son, Larry Wayne; two brothers, Larry Meyers and Robert Meyers; one sister, Marcella Lee, and one granddaughter, Rhonda Martin. Betty is survived by her daughters, Lynda Martin (Rhodes) of Alva, Oklahoma, and Dina Sappenfield (Jack) of Purcell, Oklahoma, grandchildren, Cary Sappenfield of Oklahoma City, Michal Martin (Marcia) of Alva, Joel Sappenfield (Candi) of Springdale, Arkansas, and Clay Sewell of Alamogordo, New Mexico; great grandchildren, Taylor Chapman (Guthrie), Rhianon Wilson (Josh), Stevi Sappenfield, Scotty Sappenfield, Connor Martin, Reygan Martin, and Reece Martin; great great grandchildren, Tucker Chapman, Caden Chapman, and Knox and Zoey Wilson. Memorial contributions may be made through the funeral home to Operation Christmas Child.

Memorial services for Betty Lou Sewell will be 10:00 a.m. Saturday, November 26, 2016, with Jack Sappenfield officiating. She was cremated at her request under the direction of Marshall Funeral Home of Alva. Betty Lou (Meyers) Sewell was born... View Obituary & Service Information

The family of Betty Lou Sewell created this Life Tributes page to make it easy to share your memories.

Memorial services for Betty Lou Sewell will be 10:00 a.m. Saturday,...

Send flowers to the Sewell family.