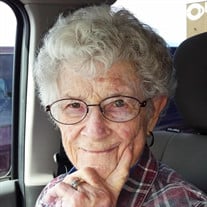 Betty Whittet was called to come home by her Lord Jesus on September 9, 2021, at the age of 94. She was a loving wife, mother, grandma, great grandma and great-great grandma. Born June 4, 1927, in Coldwater, Kansas, and raised in Lookout, Oklahoma, by her parents, Edgar Jackson Coles and Frances Folsom (Carter) Coles. She was given her Christian name of Betty Jane Coles. Betty attended and graduated from Freedom High School class of 1945. She attended one year of college at Northwestern in Alva, Oklahoma. Soon she met a good looking man in an Army Uniform at a Valentine dance at the American Legion and married the love of her life Stanley E. Whittet, Sr. They were married December 2, 1946, at the Methodist Church in Coldwater, Kansas. From this marriage five children were born. The family moved from Freedom, Oklahoma, to Albuquerque, New Mexico, in 1955. After five years they moved to the mountains east of Albuquerque. A few years after the passing of her husband, Betty moved to Sedillo Hill in Tijeras, New Mexico. She resided there for 35 years, where she helped raise grandchildren, she loved to feed the birds and watch the wildlife with her beautiful view of the Sandia Mountains. Betty loved to cook for her family and friends. Of course she made all the New Mexican traditions including tamales and posole for the holidays. She was an excellent seamstress and made most of her family’s clothes, which included matching western wear for her and Stanley when they went dancing. She loved her garden and her houseplants that she shared with everyone. Grandma Betty loved to watch her grandkids play sports. She became Grandma Betty to everyone. Besides her parents, she was preceded in death by her husband, Stanley; five brothers, infant brother, Glen Coles, Lester, Kendall, Jack and Eldon Coles and their wives; and two sisters, Helena (Coles) Burelson and Maxine (Coles) Nixon and their husbands. Betty is survived by her five children, Stanley E. Whittet, Jr. and wife, Doreen, of Gilbert, Arizona, Robert Whittet and and Yaszmina of Santa Fe, New Mexico, Bruce Whittet and wife, Sherry, of Green Valley, Arizona, Vanessa (Whittet) Gerloff and husband, Gary, of Freedom, Oklahoma, and Regina (Whittet) Hearn and husband, John, of Tijeras, New Mexico. Also surviving are ten grandchildren, Frank Whittet and wife, Janell, Scott Whittet and wife, Suzanne, Amy Coughenour, Mike Whittet and wife, Jessica, Kimberly Whittet, Josh Neese and wife, Amy, Lori King and husband, Randy, Chance Gerloff and wife, AlyJea, John Stanley (Bubba) Hearn, Brenda Hearn and fiancé, Manny Vazquez; fifteen great grandchildren, Blake, Kyle, Lexie and Sebastian Whittet, Cole and Dane Whittet, Sylus Coughenour, Penelope Carr, Madison Seymour and husband Jay, Easton and Jaydon Neese, Lawson King and Kinsey, Ashton King, Gray and Cecil Gerloff; two great –great grandchildren, Cora Brooke Seymour, Libby Lee King; one sister, Virginia (Ginny) Reinke and husband, Karl; one sister-in-law, Doris (Whittet) Guntrum; A Christmas exchange and pen pal Isabel (Whittet) Campbell of Lossiemouth, Scotland; a very dear friend LuAnn McKee and family; several nieces, nephews and many, many friends. Betty will be laid to rest by her beloved Stanley at Sunset Memorial in Albuquerque, New Mexico, with a graveside memorial at a later date. In our Mom’s memory she taught us kids to say “ I Love You” often, especially when we left her home or said goodbye on the phone. So everyone, please say “I Love You” to someone dear to you often.

Betty Whittet was called to come home by her Lord Jesus on September 9, 2021, at the age of 94. She was a loving wife, mother, grandma, great grandma and great-great grandma. Born June 4, 1927, in Coldwater, Kansas, and raised in Lookout, Oklahoma,... View Obituary & Service Information

The family of Betty Jane Whittet created this Life Tributes page to make it easy to share your memories.

Betty Whittet was called to come home by her Lord Jesus on September...

Send flowers to the Whittet family.