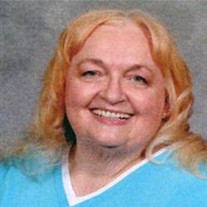 Beverly Anne Baxter, daughter of Johnny James and Ruth (Lord) Baxter, was born August 12, 1949, in Alva, Oklahoma, and passed away April 15, 2016, at Kansas City, Kansas, at the age of 66 years, 8 months, and 3 days. Beverly attended Alva Schools and graduated from Alva High School with the Class of 1967. She attended Northwestern Oklahoma State University and graduated with a BA Degree in 1971. Beverly loved teaching and began teaching Sunday School at age 12. Her teaching career began in the fall of 1971. She taught Speech, Drama, Debate, and Language Arts at Easton High School, St. John’s Military School in Salina, and Junction City High School. She first attended graduate school at Emporia State University. She attended Kansas State university while teaching at Junction City and completed certification in both Gifted Education and Learning Disabilities. She then began teaching Special Education at Central Middle School in Kansas City in 1978. She taught hundreds of middle school age students with reading disabilities to read. She also completed her M.S. in Education from Kansas University. She continued in this position for over 30 years until her retirement in 2009. Beverly grew up attending the Alva Assembly of God Church and continued to teach and work in churches for the rest of her life. She directed many church programs, wrote scripts and directed church drama groups. She also loved to sing and sang with her family. She enjoyed singing at many special occasions. She was a member of New Life Community Church in Kansas City, Missouri. Her teaching brought her many awards. The Easton High School Senior Classes of 1972 and also 1973 both presented her with their Yearbook Dedications. She was voted Teacher of the Year in both 2003 and again in 2004 at Central Middle School. She was also nominated for the Kauffman Excellence in Teaching Award in Kansas City. She sold and published a Speech and Drama textbook, Activities for Oral Communication and Programs, and also has an on-line teaching store @Beverly Baxter Teachers Pay Teachers. Beverly joined her family in heaven: her parents Johnny and Ruth Baxter; her brother and sister-in-law Merle and Jackie Baxter; and grandparants, John and Osie Baxter and Alf and Thelma Lord, who preceded her in death. She is survived by her three brothers and their families: Dan (Carolyn) Baxter of Lowell, Arkansas; Darrell (Sharon) Baxter of Birmingham, Alabama; and Mike (Julie) Baxter of Smyrna, Tennessee. She is survived by her four brothers and their families, Dan (Carolyn) Baxter of Lowell, Arkansas, Darrell (Sharon Baxter of Birmingham, Alabama, Merle Baxter of Tulsa, Oklahoma, and Mike (Julie) Baxter of Nashville, Tennessee. She is also survived by several nephews and nieces, John (Leah), Phillip (Suzanna), Stephanie (Sam), Clinton, Lauren, Jillian, Brandon, and Ryan; and four great nephews, Landon, Chase, Hughie, and Henry Baxter, and many other cherished relatives and friends. She was cremated at her request and a private memorial will be held. Memorial contributions may be made to the Alva Assembly of God Church or the New Life Community Church in Kansas City, Missouri.

The family of Beverly Anne Baxter created this Life Tributes page to make it easy to share your memories.

Send flowers to the Baxter family.