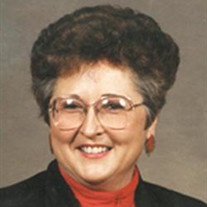 Funeral services for Beverly Ann Yadon "Mimi " will be 1:00 p.m. Thursday, July 23, 2009, at the Waynoka School with Bill David Walker and Scott Kysar officiating. Interment will be in the Waynoka Cemetery under the direction of Marshall Funeral Home of Waynoka, LLC. Beverly Ann Reed-Yadon, daughter of the late Ray Reed and Christie Ritchie-Reed, was born June 21, 1937, in Alva, Oklahoma and passed away July 20, 2009, at her home in Waynoka, at the age of 72 after an arduous battle with cancer surrounded by her loving family and friends. Mimi attended school at Alva, Oklahoma. On July 3, 1954, she was united in marriage to Bob D. Yadon at Alva, Oklahoma. They traveled to Augusta, Georgia, while Bob served in the military where their first son, Bobby Dale Yadon Jr., was born. Son Bryon Denzil Yadon was born in Hutchison, Kansas, upon their return from the military. Daughters Brenda Sue Yadon-Beck and Bonita Loue Yadon-Smith were born in Coldwater, Kansas. Mimi worked many jobs in her lifetime, but spent most of her time helping others. She was the ultimate caregiver. She worked at the Pioneer Lodge in Coldwater, Kansas, and the Waynoka Nursing Center, as well as the Waynoka Ambulance Service and the Woodward Ambulance Service before "retiring? as a caregiver/companion for Karen Ferguson and many Waynoka High School athletes, grandchildren, and great grandchildren. Besides her parents, Mimi was preceded in death by sister Sondra Reed, brother-in-law Manuel Ramirez, adopted grandson Nathan Lyon and her father and mother ?in-law, Nan-Nan and Darci Yadon. Mimi is survived by her husband Bob Yadon of Waynoka; two sisters, Virginia Fisher of Las Vegas, Nevada, and Bonnie Forcum of Waynoka; two brothers, Bob Reed and wife, Nadine, of Alva, and Kenneth Reed and wife, Donna, of Haysville, Kansas; two sons; Bob Yadon Jr. and Cheryl of Princeton, Texas, and Bryon Yadon of Waynoka; two daughters, Brenda Beck and husband, Brad, of Waynoka, and Bonnie Smith and husband, Rusty, of Elgin, Oklahoma; her goddaughter, Sherri Miller-Childers and husband, Paul, of Waynoka; as well as her grandchildren, Brandi Beck-Mendenhall and husband, Keoni, of Virginia Beach, Kim Betterton and husband, Brandon, of Princeton, Britni Beck-Carson and Chris of Waynoka, Brandon Yadon of Waynoka, Kendra Loftice of Princeton, Bryne Beck of Waynoka, Brooke and Brendan "Ty? Smith of Elgin, and Kourtney and Kolten Childers of Waynoka; two great granddaughters, Breya and Brylee Carson of Waynoka; close family friend, Gayla Milledge, and husband, Larry, and family; other relatives and many friends. It was Mimi&s desire that her funeral be conducted in a casual sporting atmosphere as she spent her life around sports and she wanted jeans and t-shirts representing the Waynoka Railroaders and the OU Sooners- her two favorite teams. Memorial contributions may be made through the funeral home to the Waynoka EMTs or the Waynoka Nursing Center.

Funeral services for Beverly Ann Yadon "Mimi " will be 1:00 p.m. Thursday, July 23, 2009, at the Waynoka School with Bill David Walker and Scott Kysar officiating. Interment will be in the Waynoka Cemetery under the direction of Marshall Funeral... View Obituary & Service Information

The family of Beverly Ann Yadon created this Life Tributes page to make it easy to share your memories.

Send flowers to the Yadon family.