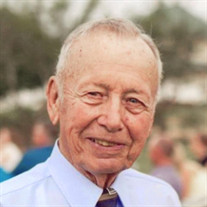 Bill V. Goss, son of the late Frank Alden and Mollie Amelia (Young) Goss, was born July 5, 1927, near Aline, Oklahoma, and passed away August 14, 2020, at his home at the age of 93 years, 1 month, and 9 days. Graveside services for Bill Goss will be 10:00 a.m. Tuesday, August 18, 2020, at the Aline Star Cemetery with Rev. Billy Sacket officiating. Interment is under the direction of Wentworth Mortuary, LLC of Carmen. The service will be livestreamed due to COVID-19 on Marshall Funeral Home Facebook page. Bill grew up in the Aline area graduating from Aline High School with the Class of 1945. He served in the United States Army in Korea from 1945-1947. On March 5, 1950, he was united in marriage to Betty Ann Stevens in Cherokee, Oklahoma. To this union, they had four children: Vicky Lyn, Kent, Brent, and Trent. Bill and Betty raised their family in Aline. Bill was a member of the Aline First Christian Church and active in his community, serving on the Aline-Cleo School Board for 13 years, the Aline Town Board, the American Legion for over 60 years, as a retired volunteer fireman for the Aline Fire Department, and was a FFA Honorary Chapter Farmer in 1984. Bill worked many years at the Helena State School, the Farmers’ Cooperative, for Bert Smith Road Machine Company, and as a auctioneer/co-owner of Goss Real Estate and Auction, as well as farming and ranching. He was preceded in death by his parents and his daughter, Vicky Lyn; his brother, Frank Goss, Jr.; his sisters, Virginia Kinney, Genella Houston, and Pearl Cravens. Bill is survived by his wife of 70 years, Betty, of rural Aline; his sons, Kent Goss and wife, Danna, of Leedey, Brent Goss and wife, Colleen, of Aline, and Trent Goss and wife, Cindy, of Alva; fourteen grandchildren, Chris Goss, Toby Goss, Cim Adams, Caitlyn Kamphaus, Blake Goss, Ty Goss, Avery Goss, Graham Goss, Quinn Goss, Craig Ritter, Lyndsey Smith, Trent Ritter, Demi Seelke, and Shalae Patton. Also surviving are twenty one great grandchildren; three sisters, Dorthy Stallings of Mustang, Mary Ann Peters and husband, Roy, of Seiling, and Georgie Haltom and husband, C.E., of Enid; sister-in-law, Mary Ellyn Goss of Enid; brother-in-law, Donald Houston of Emporia, Kansas; and many other relatives and friends. Memorial contributions may be made through Wentworth Mortuary to the Aline First Christian Church or the Aline Fire Department. Bill was always a good husband, father, and deeply loved and enjoyed his grandchildren. He will be greatly missed by his loving wife, his family, his friends, his community, and by all who knew him.

Bill V. Goss, son of the late Frank Alden and Mollie Amelia (Young) Goss, was born July 5, 1927, near Aline, Oklahoma, and passed away August 14, 2020, at his home at the age of 93 years, 1 month, and 9 days. Graveside services for Bill Goss... View Obituary & Service Information

The family of Bill V. Goss created this Life Tributes page to make it easy to share your memories.

Send flowers to the Goss family.