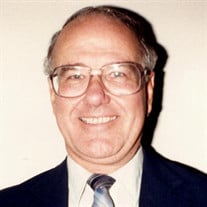 Memorial graveside services for Bill Dan Murray will be 11:00 a.m., Saturday, October 8, 2016, at the Waynoka Municipal Cemetery with Scott Hofen and Billy Moore officiating. Arrangements are under the direction of Marshall Funeral Home of Alva. Bill was born to the late Charles and Jessie Ruth Murray on April 18, 1932, and passed away August 20, 2016, at the age of 84. After graduating, Bill began his career in Wichita, KS, then to Overland Park, KS, and finally settled in Racine, WI, where he worked and raised his family for the next 43 years. Bill’s work took him all over the United States, Canada and Mexico. He liked to tell folks he had driven one million miles without an accident. After retirement, he returned home to work 12 years for his brother-in-law, Henry Hofen, on the family farm. Bill’s hobbies included fishing and sailing on Lake Michigan and trips to Las Vegas, NV. Besides his parents, Bill was preceded in death by his brother, Clifton and wife, Eunice; sister Dorthy and husband, Ick Hickman; son, Michael Murray; grandson, Jeff Panko and nephew, Bruce Hickman. Bill is survived by his wife of sixty-five years, Alvina (Hofen) Murray of the home; three daughters all of Racine, WI, Beverly Murray and Dan Eimeyen, Barbara and Mark Derderian, Belinda and Tom Hinsman; five grandchildren and eight great-grandchildren; three nieces, JoAnne Melton, Rita and Charles Polf, Lois and Harry Kearns; other relative and friends. In lieu of flowers, contributions may be made through the funeral home to Alzheimer’s Research.

Memorial graveside services for Bill Dan Murray will be 11:00 a.m., Saturday, October 8, 2016, at the Waynoka Municipal Cemetery with Scott Hofen and Billy Moore officiating. Arrangements are under the direction of Marshall Funeral Home of... View Obituary & Service Information

The family of Bill Dan Murray created this Life Tributes page to make it easy to share your memories.

Memorial graveside services for Bill Dan Murray will be 11:00...

Send flowers to the Murray family.