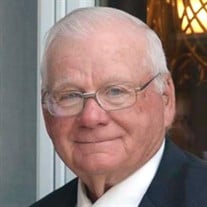 Bobby “Bob” Alan McCray, Sr. 81, passed away Thursday, Dec. 12, 2019, at Share Medical Center in Alva. He was born Oct. 1, 1938, in Stillwater. His parents were Calvin and Ruby McCray and he has one brother, Jack McCray, and one sister, Rachael Prestwood. Bob attended and graduated from Waynoka Public School. He attended college before entering the United States Army in August of 1958 and served time in Okinawa. He was honorably discharged in July of 1964. Bob and Letha were married Nov. 20, 1987, in Wichita Falls, Texas, and made their home in Alva, later moving to the farm south of Alva. Bob was a member of the Alva Elks Lodge for the past 51 years serving many of those years as secretary, and was currently serving as trustee. He served on over 20 committees throughout his time and because of his love of helping kids, he was always directly involved in the annual Elks Hoop Shoot. Bob was an independent contract pumper, retiring in 2009, he also worked for TKO gas company from 2008 to current, but his real love was farming and ranching. In his later years, Junior Maltby became his close friend and business partner which allowed Bob to continue his passions on the farm. He is survived by his wife, Letha, of Carmen; one son, Kevin McCray and wife, Mary, Carmen; two daughters, Kim Whyburn, Edmond; Jo Hammer and husband, Hoby, Fairview; and one daughter-in-law, Tammie Schmidt, Elk City; one brother Jack McCray and wife, Joyce, Alva; one sister, Rachael Prestwood and husband Jack, Wichita Falls, Texas; 11 grandchildren, 21 great grandchildren, and numerous friends. He was preceded in death by his parents; two sons, Alan McCray, Jr. and Rusty Schmidt; one son-in-law, David Whyburn; and two grandchildren, Jeremy Baxter and Jamie Schmidt. Memorials may be made to the Elks Lodge in Alva or the American Kidney Foundation with Marshall Funeral Home serving as custodian.

The family of Bobby Alan McCray created this Life Tributes page to make it easy to share your memories.

Send flowers to the McCray family.