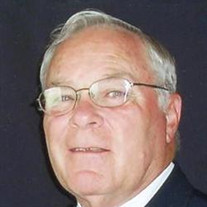 Funeral services for Bobby Dale Yadon Sr., "PaPa” will be Saturday October 24, 2015, at 10:00 a.m. at the First Baptist Church in Waynoka with Bill David Walker officiating. Interment will be in the Waynoka Cemetery under the direction of Marshall Funeral Home of Waynoka, LLC. Bobby Dale Yadon Sr., son of the late Norman and Mildred Yadon, was born November 13, 1933, in Wilburton, Kansas, and passed away October 17, 2015, in Alva, Oklahoma, at the age of 81, surrounded by his loving family. Bob grew up in Thomas, Oklahoma. He later moved to Seiling and finished his high school years in Alva where he graduated with the class of 1951. On July 3, 1954, he was united in marriage to Beverly Ann Reed in Alva. He attended NWOSU where he lettered in football and baseball and during the summer played D League Baseball. In 1956, Bob was drafted in the Army and stationed in Augusta, Georgia where he served 2 years and was promoted to E-3 Specialist. In 1958, Bob received an honorable discharge and he and his family returned back to Alva. Bob returned back to NWOSU and finished his last year of college and received his Bachelor’s Degree in Education. In 1959, Bob began his 37 years of teaching and coaching. His career took him to Bentley, Kansas and Coldwater, Kansas. While working as a full time teacher and coach, he also drove back to Alva until he received his Master’s Degree in Education. In 1971, he and his family moved to Spearville, Kansas, until 1975 when the Yadon family returned back to Oklahoma. In 1975 Bob was hired as the Summer Director, Jr. High Principal and Coach at Waynoka Public Schools. His successful coaching career awarded him and the Waynoka Railroader Football Team the State Championship in 1976. He also coached many successful basketball, baseball, track and softball teams. In June of 1996 Bob retired. Bob stayed very active after his retirement, holding numerous part-time positions coaching and substitute teaching. He especially enjoyed teaching and coaching his grandkids from the sidelines. Bob was preceded in death by his parents Norman and Mildred, “NanNan and Darci” Yadon, his wife Beverly Ann Yadon, his son Bryon Denzil Yadon, and his father-in-law and mother-in-law, Ray and Christie Reed. PaPa is survived by one son, Bob Yadon Jr. and Cheryl of Princeton, Texas; two daughters, Brenda Yadon-Beck and husband, Brad, of Waynoka, and Bonnie Yadon-Smith and husband, Rusty, of Newcastle; his Goddaughter, Sherri Miller-Childers and husband, Paul, of Waynoka; his grandchildren, Brandi Beck-Mendenhall and husband, Keoni, of Virginia Beach, Virginia, Kim Loftice-Betterton and husband, Brandon, of Princeton, Texas, Britni Beck-Wharton and husband, Chris of Waynoka, Brandon Yadon and wife, Keyana of Waynoka, Kendra Loftice of Princeton, Texas, Bryne Beck and wife, Rachel of Woodward, Brooke Smith and Michael Seachris of Waynoka and Brendan "Ty” Smith of Newcastle, Kourtney Childers-Webb and husband, Ryan, and Kolten Childers of Waynoka; six great granddaughters, Breya and Brylee Wharton, Camdyn Yadon, and Kenzlee Seachris all of Waynoka, Jaylee Beck of Woodward, and Elizabeth Betterton of Princeton, Texas; and 3 great grandson’s, Briston and Jay Wharton and Maximus Yadon of Waynoka and Karter Webb who will arrive in November; his sister, Norma Jo Yadon-Davison and her husband Bob of Alva and family; one brother-in-law, Bob Reed of Alva and family; other nieces, nephews and a host of family and friends. Memorial contributions can be made through Marshall Funeral Home. Contributions will be given to the Railroader Alumni Scholarship fund via Clay Martin, Erick Bradford and Larry Goff. Papa would have liked nothing more than to contribute to furthering the education of a Waynoka High School student.

Funeral services for Bobby Dale Yadon Sr., "PaPa&#8221; will be Saturday October 24, 2015, at 10:00 a.m. at the First Baptist Church in Waynoka with Bill David Walker officiating. Interment will be in the Waynoka Cemetery under the direction... View Obituary & Service Information

The family of Bobby Dale Yadon, Sr. created this Life Tributes page to make it easy to share your memories.

Send flowers to the Yadon, family.