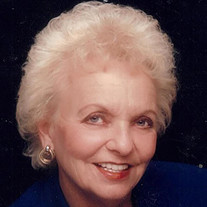 Graveside memorial service for Bonnie Wares will be 2:00 p.m. Sunday, August 9, 2020, at the Freedom Cemetery with Rev. Mark Kinkel officiating Bonnie Wares was the fourth child of Clarence and Lottie Knox. She was born in 1936 on a farm north of Freedom. She attended grades one and two at Houston Valley School before it was consolidated into Freedom School. She graduated from Freedom School in 1954. Bonnie started working at the café in Freedom when she was 13 years old. Her boss was Roy Wilson, and Bonnie credited him with making her a good waitress. Roy advised her, Don’t ever come back to the kitchen without something in your hands. You take peoples food out and you bring back something. She also worked as a switchboard operator in high school at the Freedom telephone office. In 1955 she married Wayne Wares, who was in her graduating class at Freedom School. They moved to a ranch outside San Antonio, TX. The ranch provided them a house and free meat. When they arrived they found out the meat was goat. After one year they moved to Brookville, KS, where Wayne was employed at a large Hereford cattle ranch. Bonnie found work waitressing at the Brookville Hotel, renowned throughout the area for their fried chicken dinners. Their first child, Merle, was born in Brookville. Wayne left the ranching job and worked construction for several years. They lived in an eight by thirty-two foot trailer that they towed from town to town wherever Wayne was building large metal buildings. Wayne and Bonnie moved back to the ranch following Wayne’s dad suffering a disabling accident in 1960. Kevin and Kyle were born there. After several years working for Wayne’s dad, they bought Wayne’s uncle Ernest’s Hereford cow herd, and began ranching on their own. Bonnie helped bolster the family income by using the ranch truck to haul gravel and wheat for hire. She also was employed by the Freedom COOP as a truck driver. She worked at the Alabaster Caverns as a tour guide as well. Later she worked for the George Dyer family as a caregiver. She also volunteered at the Freedom Museum and as a Pink Lady at the Woodward Hospital. Bonnie took up deer hunting at age 60 following the maxim, If you can't beat em, join em. Wayne and their sons were avid deer hunters, and Bonnie took up the sport as well. She killed several big deer with a rifle including a 12 point buck before trying her hand at bow hunting, and she bagged a doe with a bow and arrow. Bonnie was baptized in the Freedom Christian Church and was an active member. She served as a Deaconess and later as an Elder. Survivors include husband, Wayne, children Merle (Susie), Kevin(Dawn), and Kyle. Grandchildren include, Holli Wares, Crystal Wares(Rhett Rushing), Courtney Jones(Austin), Garrett Wares (Stephanie), and Harley Wares. Great grandchildren include Quinn and Max Jones. Her older sister Lila Buss, who visited her faithfully in Grace Living Center and brought much joy and comfort, passed away recently. Older brother Bill Knox (Delores) survives her as well. The family would like to thank the staff at Grace Living Center for the excellent care they provided Bonnie during her last years. Memorial contributions may be made through the funeral home to the St. Jude’s Children’s Hospital.

Graveside memorial service for Bonnie Wares will be 2:00 p.m. Sunday, August 9, 2020, at the Freedom Cemetery with Rev. Mark Kinkel officiating Bonnie Wares was the fourth child of Clarence and Lottie Knox. She was born in 1936 on a farm north... View Obituary & Service Information

The family of Bonnie Mae Wares created this Life Tributes page to make it easy to share your memories.

Graveside memorial service for Bonnie Wares will be 2:00 p.m....

Send flowers to the Wares family.