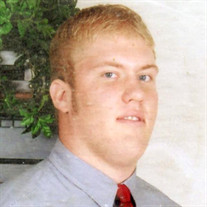 Interment will be 1:00 p.m. Saturday, December 16, 2017, at the Alva Municipal Cemetery. Memorial services will follow at 3:00 p.m. Saturday, December 16, 2017, at the Alva First Baptist Church with Pastor Chris Ruwaldt officiating. Arrangements are entrusted to Marshall Funeral Home of Alva. Brandon Dale Harmon, son of Larry Dale Harmon and Sandra Jean Kamas, was born May 16, 1985, at Enid, Oklahoma, and passed away December 11, 2017, at Alva, Oklahoma, at the age of 32 years, 7 months, and 1 day. Brandon graduated from Alva High School. He received a scholarship to play football at Pittsburg State University in Pittsburg, Kansas. After two years, he moved to Edmond where he attended the University of Central Oklahoma and graduated in 2009 with a major in Finance. While at Edmond, he worked at the Oak Tree Country Club. He then returned to Alva where he worked for Steggs Aerial Spraying for a time. His latest job was a Financial Analyst for Prime America.Brandon was a member of the Alva First Baptist Church. He enjoyed playing golf, the Oklahoma State University sports, and the Dallas Cowboys. Brandon is survived by his daughter, Harper Paige Harmon of Hillsdale, Oklahoma; his mother, Sandra Kamas and husband, Les, of Freedom; his father, Larry Harmon of Alva; his sister, Nikki (Harmon) Steggs and husband, Garret, and their three sons, Kye, Sloan, and Walker Steggs, all of Edmond; other relatives and many friends. Memorial contributions may be made through the funeral home to Oklahoma Chapter of NAMI National Alliance on Mental Health.

The family of Brandon Dale Harmon created this Life Tributes page to make it easy to share your memories.

Send flowers to the Harmon family.