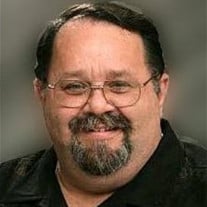 Memorial services for Brian R.J. Smithey will be 3:00 p.m. Tuesday, May 29, 2018, at the Alva School Auditorium with Rev. Bill Kalfas officiating. He was cremated at his request under the direction of Marshall Funeral Home of Alva. Brian R.J. Smithey, son of Donnetta Smithey and the late R.J. Smithey, was born December 21, 1960, in Oklahoma City, and passed away May 18, 2018, after a battle with cancer, in Oklahoma City, at the age of 57 years, 4 months, and 27 days. He met his wife in band class at Dickson High School. Brian played trombone and Terry played flute. Brian graduated from high school in 1979 then went on to college at Southwestern Oklahoma State University. Brian and Terry married in a small church in Dickson, Oklahoma on June 12th, 1982 and lived in Weatherford, OK so that Brian could finish college. He graduated from Southwestern Oklahoma State University in 1983. Brian had plans to be a teacher but life's journey took him in different directions. He and his wife along with their two children Mark and Sarah, lived in Kansas, Texas and back to Oklahoma until they moved to Cherokee, Oklahoma. There Brian managed the Alco store until finally coming back to his dream of being a teacher. He often joked that working all those jobs before teaching taught him the much-needed patience to teach kids. Brian was a math teacher at Fairview High School for one year before finding his home at Alva Independent Schools where he enjoyed teaching for 19 more years. He was very proud of his children and worried about them every day. He always joked about building a big house with room for he and his wife Terry, both children and their families, and his mother to live in together. His daughter Sarah and her husband Michael gave him two grandsons, Hollis and Archer, who he absolutely adored. He once told Terry his wife to stop buying so many things for their grandsons as she was spoiling them. Then the very next day a large Amazon box arrived full of things he had purchased for Hollis and Archer. When he could not travel to see his children, grandchildren or mom he loved getting on Skype so that he could see their faces as he talked to them. Brian loved teaching and felt as though his students were HIS kids. He always felt that it was not only his responsibility to teach them math but to prepare them for life. He especially wanted to teach them what REAL music was. He was passionate about music and his students learned how to appreciate music and grew to love the music from Brian's generation. Music was a passion for Brian even back in high school. He formed a brotherly bond with four friends who also loved band and music and they are still like family to this day. He loved sharing stories of the good ole days and those four friends, Mark Owen, Richard King, Steve McClain and Chris Jackson, with his friends and family. Brian's children grew up with most of these friends and loved them as much as Brian did. This always made Brian very happy. Anyone who knew Brian knew that he loved movies. In fact, it would not me a normal day if he didn't repeat a quote from a movie at some point throughout the day. He loved saying a quote and then quizzing his family on which movie it was from. When friends came to visit he would quiz them on which movies they had seen and find one from his collection that they hadn't seen, have Terry pop some popcorn and have movie night. When he wasn't enjoying music or movies his attention was on OU football. He was a huge fan. He had accumulated boxes of OU items with big plans of taking over the den in his home and making it his OU Man Cave. He loved teasing his OSU fan friends on Facebook. Brian was a very kind and caring man who always wanted to help people. At times, he doubted whether he had accomplished all that he was meant to in life but then he would receive a call, letter, or Facebook post from a former student telling him how much he had changed their lives. Brian touched a lot of lives throughout his life and was very respected and loved. Besides his father, he was preceded in death by his sister, Christie Belveal. He leaves behind his wife of 35 years, Terry Smithey; his son Mark Smithey; his daughter, Sarah Talbert and her husband Michael; grandsons, Hollis and Archer Talbert, his sister Tracy Spainhour and husband, Brian; other relatives and many friends. Memorial contributions may be made through the funeral home in Brian’s memory to help with medical expenses.

Memorial services for Brian R.J. Smithey will be 3:00 p.m. Tuesday, May 29, 2018, at the Alva School Auditorium with Rev. Bill Kalfas officiating. He was cremated at his request under the direction of Marshall Funeral Home of Alva. Brian... View Obituary & Service Information

The family of Brian R. J. Smithey created this Life Tributes page to make it easy to share your memories.

Send flowers to the Smithey family.