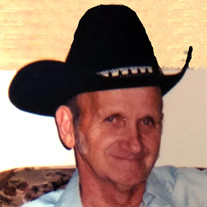 Memorial graveside services will be 2:00 p.m. Saturday, February 3, 2018, at the Aline Star Cemetery with Rev. Linda Grounds officiating. Buddy was cremated at his request under the direction of Wentworth Mortuary, LLC. Buddy Anthony, son of the late Roy H. and Nora B. (Shepard) Anthony, was born November 11, 1929, in the same home where he lived his whole life in Aline, Oklahoma, and passed away January 29, 2018, at the age of 88 years, 2 months, and 18 days. Bud graduated from Aline High School. On June 30, 1950, he was united in marriage to Cordelia June Frey at Waukomis, Oklahoma. They raised their family in Aline where he owned and operated Bud’s Salvage for 35 years before retiring and starting a motorcycle salvage out of his home. He lived the past 2 years at Beadles Nursing Home where he received the utmost care. Bud was a member of the Aline United Methodist Church. He loved motorcycle riding and going to Las Vegas where he liked to shoot craps. He was a very loving husband, father, grandpa, and great grandpa. Besides his parents, he was preceded in death by one son, Max Leroy Anthony; and three sisters, Winifred Parker, Wilma Beasley, and Mildred Ring. He is survived by his wife, Cordelia, of the home; two sons, Cary Don Anthony and wife, Nancy, Rocky Kent Anthony and wife, Vicki; and his daughter-in-law Rita Anthony, all of Aline; two half sisters, Judy Murphy and husband, Roger, and Jean Reasonover, both of Texas; 10 grandchildren; 20 great grandchildren; other relatives and friends. Memorial contributions may be made through the funeral home to the Oklahoma Medical Research Foundation for Alzheimer’s Research.

The family of Buddy "Bud" Anthony created this Life Tributes page to make it easy to share your memories.

Send flowers to the Anthony family.