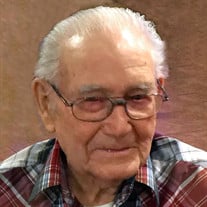 Memorial services for Calvin Wayne Leeper will be 2:00 p.m. Friday, February 17, 2017, at the First Christian Church (Disciples of Christ) with Pastor Ron Pingelton officiating. Interment will be prior to the service under the direction of Marshall Funeral Home of Alva. Calvin Wayne Leeper, son of the late Jay W. and Leona Easter (Crowder) Leeper, was born February 18, 1924, east of Dacoma, in Alfalfa County, Oklahoma, and passed away February 12, 2017, at Alva, Oklahoma, at the age of 92 years, 11 months, and 24 days. Calvin graduated from Dacoma High School with the Class of 1942. He enlisted in the United States Navy where he served on the USS Meriwether and was discharged in June of 1946. On November 15, 1947, he was united in marriage to Jacqueline Nugent at the First Christian Church in Alva. He farmed and ranched in the Dacoma area all of his life. He was a member of the First Christian Church (Disciples of Christ). He was also a member of the Elks Lodge and a charter member of the Alva Moose Lodge. He served 26 years on the Dacoma Farmer’s Coop Board. He and Jacqueline loved cruises, having been on 25 cruises. He enjoyed being with family and friends, boating, water skiing, and fishing. Besides his parents, he was preceded in death by his sister, Leota Keltner, and two brothers-in-law, Russell Keltner and Durward Brown. Calvin is survived by his wife, Jacqueline Leeper of Alva; three children, Linda Leist and husband, George, of Freedom, Lee Leeper and wife, Tracie of Alva, and Jay Leeper and wife, Terri of Alva; one sister, Jadeena Brown of Alva; and one sister-in-law, Sandra Hall and husband, Elston, of Colleyville, Texas. Also surviving are seven grandchildren, Lee Ann Leist of Alva, Shannon Frazier and husband, Jason, of Enid, Carly Williams and husband, Cody, of Alva, Cale Leeper and wife, Cinthia, of Dacoma, Candice Leeper of Anchorage, Alaska, Kate Leeper of Alva, and Kayla Leeper of Alva; six great grandchildren, Makena Sherrell of Stillwater, Aaliyah and Aaron Frazier of Enid, Harper and Vivian Williams of Alva, and Gabby Leeper of Dacoma; other relatives and friends. Memorial contributions may be made through the funeral home to the First Christian Church (Disciples of Christ) Building Fund or the Homestead Activity Fund.

Memorial services for Calvin Wayne Leeper will be 2:00 p.m. Friday, February 17, 2017, at the First Christian Church (Disciples of Christ) with Pastor Ron Pingelton officiating. Interment will be prior to the service under the direction of... View Obituary & Service Information

The family of Calvin Wayne Leeper created this Life Tributes page to make it easy to share your memories.

Memorial services for Calvin Wayne Leeper will be 2:00 p.m. Friday,...

Send flowers to the Leeper family.