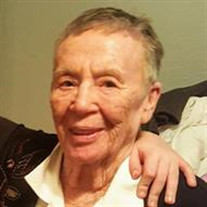 Funeral services for Carmen Cain will be 10:00 a.m. Friday, December 18, 2020, at the Cherokee Christian Church. Interment will be 2:30 p.m. Friday, in the Sunnyside Cemetery, Vici, Oklahoma, under the direction of Wentworth Mortuary, LLC. Carmen Carol Cain was born September 13, 1930, in a dugout on the family farm south of Vici, OK. The daughter of Purl Lawrence and Ruby Irene (Buck) Cain. She passed from this life Saturday, December 12, 2020 at the age of 90. Carmen started to school at Vici in 1936. The first two weeks she went to school in one of the local churches while they waited on the new school to be finished. In 1946, Carmen began working for the Brandon Frost family, helping care for their children. While there, she attended school in Woodward, Ok. In 1947, she married Ronnie Clemons of Fort Worth, Tx. Rhonda Claire was born to this union. Carmen and her baby were living with her parents in 1948. She was going to town with her dad, and said to her “do not come home till you have a job.” She began to work for the Vici Beacon, owned by Ralph Emerson Cain, SR. This is where she met her future husband, Ralph Jr. She continued working for the Vici Beacon, local cafes, and the local chamber of commerce while finishing school, graduating in 1950. She married Ralph Emerson Cain, Jr. on August 12, 1950 at the Vici Christian Church. She always said that the only way to keep Ralph Sr. from firing her every day was to marry his son. They were the first couple to be married in the new church. She also was one of the first groups to be baptized in the new church. In 1971 they purchased the Carmen Headlight, Helena Star, Aline Chroniscope and Goltry Meno News. They combined the papers into the Alfalfa County News in 1972. Ralph passed away in May of 1991. She soon learned she couldn’t publish the paper by herself. She sold it to Larry Hammer and Steve Booher at the Cherokee Republican. After Ralph’s death, Carmen worked 4 ½ years for Opportunities Inc. and later began helping in the Carmen City Clerk’s office. She then served as Carmen librarian for ten years. After retiring from the Library in 2011, she moved to Cherokee. She was a member of the Eastern Star, Carmen and Alfalfa County Historical Societies. Carmen enjoyed her activities in the church, bible study, Friends of the Library, and helping out at the thrift store. Her hobbies were reading, embroidery and visiting shut-ins. Besides her parents, she was preceded in death by her husband, Ralph; and one son, William Cain. Carmen is survived by her son, Larry Cain and wife, Lahoma, of Cherokee; two daughters, Ronda Cavel of Marlo and Carol Campbell of Amarillo, Texas; one brother, John Cain and wife, Leslie, of Vici; three sisters, Creola Nebitt of Amarillo, Texas, Hettie Stevens of Vici, and Karen Stephenson of Muskogee; five grandchildren, Gus Elfving of Washington, D.C., Christi Bradford and husband, Josh, of Wichita, Kansas, Marcus Elfving and wife, Janelle, of Ponca City, Tammie Bowling and husband, Mike, of Yukon, and Nathan Campbell and wife, Tiffany, of Amarillo, Texas; ten great grandchildren; other relatives and friends. Memorial contribution may be made through the mortuary to Cherokee Christian Church or the Carmen Library. She is missed by family and friends and remembrances may be shared at www.marshallfuneralhomes.com.

Funeral services for Carmen Cain will be 10:00 a.m. Friday, December 18, 2020, at the Cherokee Christian Church. Interment will be 2:30 p.m. Friday, in the Sunnyside Cemetery, Vici, Oklahoma, under the direction of Wentworth Mortuary, LLC. Carmen... View Obituary & Service Information

The family of Carmen Carol Cain created this Life Tributes page to make it easy to share your memories.

Funeral services for Carmen Cain will be 10:00 a.m. Friday, December...

Send flowers to the Cain family.