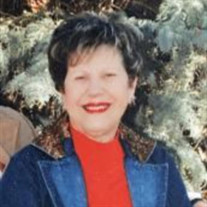 Funeral services for Carole Claudette Grover will be 1:30 p.m. Thursday, February 10, 2022, at the Cherokee Friends Church with Pastor Chuck Coulter officiating. Interment will be in the Byron-Amorita Cemetery under the direction of Marshall Funeral Home of Alva. Carole Claudette Grover was born on August 28, 1937, to Claudia and Vernon Tucker of Byron, Oklahoma. During her early years, her Dad and Mom owned and operated a hardware store and gas station in Byron. Being an only child, and with both Mom and Dad working in the store, she spent much of her time in the store and so, became the “town kid” everyone knew and loved. When she was ten years old, her Dad bought a farm and the next year they sold the store and moved to the farm. Even though their first years on the farm were financially tough, the three always agreed these were the best years of their family’s life. Her parents always sent her to Sunday School but didn’t go with her. Though Carole couldn’t remember exactly when she made her own profession of Christian faith in Jesus, she remembered very well the day when she was twelve, when her Daddy made his profession of faith in Jesus and they all three started going to church together every Sunday. A highlight of Carole’s high school days was playing basketball for Coach Loyd Stout. Carole was married to her high school sweetheart, Ed Grover, on her eighteenth birthday. Their first child, Bradley, was born two years later, five days before Ed received his Bachelor’s degree from OSU, Stillwater, OK. Ed’s work took their new family first to Guymon, OK for two years, then to Seiling, OK, for the next two years, where a second son, Barry was born. They then moved to Alfalfa County where Ed continued his work. The next two years brought much trauma intermingled with much family and community love, as Carole and Ed lost their first-born son to cancer and a short time later, her Dad died an early death. Carole came from a family of courageous people and through that inheritance she somehow found her way forward. A third child, Staci, was born to Carole and Ed when she was twenty seven years old. Three years later, at the age of thirty, she enrolled in college at NWOSU, Alva, OK, to work toward a degree in Early Childhood Education. After graduating in 1970, Carole started teaching Kindergarten at Medford Public School. Except for two years when she taught fourth grade at Medicine Lodge, KS Public School where Ed was also teaching, she spent the next 33 years teaching Kindergarten and First Grade at Cherokee and back at Medford. Ed convinced her to retire from teaching, along with him in 2003 but Carole missed her “little people” so much she opened her own Pre-school, first at the Cherokee Methodist Church, then later at the Cherokee Friends Church. In 2020, both Cherokee and Burlington Public Schools initiated all-day pre-schools and so Carole lost access to her “little people.” And she told a few people what she thought about that! Every year of the fifty years she taught her “little people,” Carole always challenged her kids to accomplish difficult things. And near the end of every year, she and her kids performed an amazing Kindergarten program which almost everyone in town came to see. Even her pre-schoolers, every year performed a special end-of-year program to the delight of full house audiences. A great many of Carole’s former students still attest to the old saying, “Everything I ever needed to know, I learned in (Mrs. G.’s) kindergarten. Though death took her first-born son, and soon her Daddy so young, and later her sweet daughter, Staci, who was only 53, as well as her Mom and step-dad, George Alton Trotter, Carole always found purpose and pleasure in her family and all her “little people,” whom she loved so much and who filled her cup full. Today is a great family reunion in heaven! Carole was always making new friends and she never forgot a friend. Whenever she and Ed attended gatherings, Ed learned to practice patience while Carole “table-hopped.” Ironically, she deferred from all reunions because everyone there was getting so much older. Carole and Ed were married in boundless love for sixty six years. Carole was never shy about hard work. For many years, she and Ed grew several acres of cantaloupes and watermelons during their summer “school break” which they harvested and sold to grocery stores all across southern and central Kansas. Carole is survived by her husband, Ed; her son Barry (and Jenny) Grover of Georgetown, KY; son-in-law Matthew Wienecke, Columbia, SC; granddaughter Calli (and Paul) Erickson, of Clovis, CA; granddaughter Whitney (and KoDee) Roberts of Enid, OK; Chandler Wienecke of Cherokee, OK; Colton Wienecke of Columbia, SC; great granddaughter, Adeline Roberts of Enid, OK; great grandson, Julian Erickson of Clovis, CA; and great granddaughter Eden Tigerlily Erickson of Clovis, CA, plus numerous relatives, friends, and her many, many students. Memorial contributions may be made through the funeral home to the Byron-Amorita Cemetery or Northwest Family Services.

Funeral services for Carole Claudette Grover will be 1:30 p.m. Thursday, February 10, 2022, at the Cherokee Friends Church with Pastor Chuck Coulter officiating. Interment will be in the Byron-Amorita Cemetery under the direction of Marshall... View Obituary & Service Information

Funeral services for Carole Claudette Grover will be 1:30 p.m....

Send flowers to the Grover family.