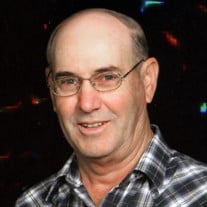 Private funeral services for Carroll Dean Eckels will be 2:00 p.m. Thursday, October 29, 2020, at Marshall Funeral Home Chapel with Rev. Dave Keller officiating. Masks will be required. Interment will be in the Pleasant View Cemetery under the direction of Marshall Funeral Home of Alva. Visitation will be Wednesday from 9:00 a.m. until 6:00 p.m. and Thursday from 9:00 a.m. until service time. Carroll Dean Eckels, son of the late Leslie S. and Hazel Katherine (Smith) Eckels, was born April 28, 1941, in Alva, Oklahoma, and passed away October 26, 2020, in Oklahoma City at the age of 79 years, 5 months, and 28 days. Dean attended Friendship rural school, graduated from Dacoma High School, and received a double Bachelor of Science Degree in Chemistry and Biology from Northwestern Oklahoma State University. On January 1, 1961, he was united in marriage to Beverly Gail Nusser at the Green Valley Church. During the Vietnam War he used his Chemistry Degree to help design and make ammunition. He then returned to Woods County where he farmed and ranched and worked in construction. He was a member of the Green Valley Church. Besides his parents, he was preceded in death by his daughter, Gayla Hudson; his infant brother, Kenneth Ray Eckels; and his sister, Rebecca Ann Weed. Dean is survived by his wife, Beverly, of Carmen; one son, Jerry Eckels and wife, Lisa, of Stillwater; 6 grandchildren, Crystal Meyers-Climer and husband, Eric, of Edmond, Brandon Eckels of Enid, Alicia Honeyman and husband, Dean, of Stillwater, Laci Koth and husband, Dylan, of Norman, Angela Murrow of Macksville, Kansas, and Lezlie Eckels of Macksville, Kansas; 8 great-grandchildren; other relatives and friends. Memorial contributions may be made through the funeral home to the Oklahoma Medical Research Foundation.

Private funeral services for Carroll Dean Eckels will be 2:00 p.m. Thursday, October 29, 2020, at Marshall Funeral Home Chapel with Rev. Dave Keller officiating. Masks will be required. Interment will be in the Pleasant View Cemetery under the... View Obituary & Service Information

The family of Carroll Dean Eckels created this Life Tributes page to make it easy to share your memories.

Private funeral services for Carroll Dean Eckels will be 2:00...

Send flowers to the Eckels family.