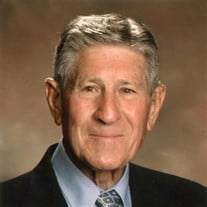 Graveside services for Cecil Ivan Tucker, Jr. will be Friday, July 20, 2018, at 10:30 a.m. at the Riverview Cemetery east of Kiowa, Kansas. Viewing will be Thursday, July 19th, 2018, from 1:00 p.m. until 7:00 p.m. at Schupbach Haus, 405 South 7th St., Kiowa, Kansas, with the family present from 5:00 p.m. to 7:00 p.m. Arrangements are under the direction of Marshall Funeral Home of Alva. Cecil Ivan Tucker, Jr. was born November 3, 1924, at Byron, Oklahoma, to Cecil Ivan Tucker, Sr. and Clara Edna Polson Tucker. Cecil passed away on July 16, 2018, at Kiowa, Kansas, at the age of 93 years, 8 months, and 5 days. Cecil was raised in his family business in Byron, Oklahoma. He attended Byron Schools until 1940 when the family moved to a farm south of Kiowa, Kansas. He graduated from Kiowa High School in 1942 and in the fall of 1942, he entered the University of Oklahoma. During his high school days, he met Verna Merryman and they were married on April 16th, 1944. Two children were born of this union Cynthia and Mark. In March of 1946 he was called to service with the Army and was stationed in Fort Jackson, South Carolina. During his childhood he and his brother were avid trapper’s and did whatever else they could do to earn money. They were known for hay hauling abilities and were taught by their parents to be business traders. Some of his early jobs were at the Mary Griffith Hatchery, Kiowa Sales Co and many other jobs such as threshing crews. He also worked for his parents in the Tucker Motor Co in Kiowa and bought it from them in 1952 and The Tucker Company evolved. He took his brother into the business in 1955 and together they formed several business enterprises which let them invest in land. Upon retirement he kept busy with his salvage business until he was age 89 1/2 years old donating the profits to charity. On Nov 16, 2013, Verna passed lacking 5 months before their 70th wedding anniversary. He and Verna traveled extensively making all the continents except Antarctica. He was an avid bowler and water skier. He enjoyed watching sports, but University of Oklahoma was his football team. He supported and appreciated the Kiowa community. Besides his parents, he was preceded in death by his wife, Verna; his brother, Dale Tucker; and his son-in-law, Bruce Bryan. He is survived by his daughter, Cynthia Bryan of Kiowa; his son, Mark Tucker and wife, Karen, of Burlington; three grandchildren, Lacey Schofield and David of Ellinwood, Kansas, Jeff Bryan of Kiowa, and Barbara Baird and Alan of Pflugerville, Texas; 12 great grandchildren; 2 great great grandchildren; his sisters-in-law, Marie Tucker of Kiowa and Betty Merryman of Topeka, Kansas; many nieces, nephews and many other family members. Memorials contributions may be made through the funeral home to the Kiowa District Hospital, Shriners Hospital or the Leukemia & Lymphoma Society.

The family of Cecil Ivan Tucker, Jr. created this Life Tributes page to make it easy to share your memories.

Graveside services for Cecil Ivan Tucker, Jr. will be Friday,...

Send flowers to the Tucker family.