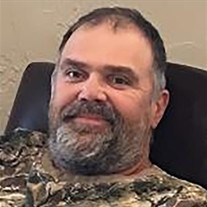 Memorial graveside services for Chad Hillman will be 2:00 p.m. Sunday, August 11, 2019, at Union Center Cemetery, Dacoma, with Rev. Don Jones officiating. Cremation arrangements are under the direction of Marshall Funeral Home of Alva. Chad Wayne Hillman, son of Steven Wayne Hillman and Peggye Darlene Funkhouser, was born December 18, 1967, at Dodge City, Kansas, and passed away August 4, 2019, near Thomas, Oklahoma, at the age of 51 years. Chad graduated from Carmen-Dacoma High School and later attended NWOSU. He enjoyed fishing and hunting. He served in the United States Army Reserves. He is survived by his father and stepmother, Steven and Renee Hillman of Dacoma; his mother, Peggye Funkhouser and husband, Mike, of Brush Prairie, Washington; his daughter, Ashley Hillman of Tulsa; his brother, Justin Hillman and wife, Amanda, of Prague; his sister, Dimitra Becker and husband, Chad, of Liberty Hills, Texas; three nieces, three nephews; other relatives and friends. Memorial contributions may be made through the funeral home to the Oklahoma Department of Wildlife Conservation or the United Methodist Church of Dacoma.

The family of Chad Wayne Hillman created this Life Tributes page to make it easy to share your memories.

Memorial graveside services for Chad Hillman will be 2:00 p.m....

Send flowers to the Hillman family.