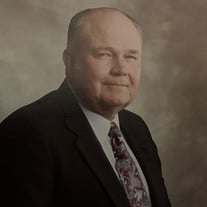 Private graveside services will be Tuesday, January 19, 2021, at the Alva Municipal Cemetery with Rev. Jim Harvey and Rev. Katie Hill officiating. Public memorial services will be 2:00 p.m. Tuesday, January 19, 2021, at the Alva First United Methodist Church. The arrangements are entrusted to Marshall Funeral Home of Alva. Charles Wesley Mallory, son of the late Alonzo Elias and Mary Ann (Huckaby) Mallory, was born December 12, 1929, in Wichita, Kansas, and passed away January 8, 2021, in Alva, Oklahoma, at the age of 91 years and 27 days. Wesley was raised in Buffalo but lived in Alva during the week to attend school due to the musical opportunities afforded to him in a larger district. He attended Horace Mann Elementary, then Alva Middle School and High School, graduating with the Class of 1947. Any time he was not in school, he was helping his dad on the farm, near Selman. He attended Northwestern State College in Alva and graduated in 1951 with a double instrumental music major in piano and trumpet. When he was 16, he met Towanda Yvonne Brickman, creating a love story that would last 75 years. On December 23, 1950, they were united in marriage at the Alva First United Methodist Church, from which two daughters were born, Barbara Yvonne and Charlene Susan. Wesley and Towanda raised their girls in Buffalo, living and farming wheat there from 1951 to 1974. While there, he served as organist, pianist and choir director in the Buffalo Methodist Church. Students would travel for miles to take lessons from him, as he was a very accomplished musician. He also served on the Selman School Board for many years until the school consolidated with Buffalo, where he earned a seat on the Buffalo School Board. When Charlene graduated high school, they moved to Alva, where he farmed west of town and continued to travel to the Buffalo/Selman area to farm, as well. Wesley was well respected by many in the farming community, where his advice was highly revered. He sat on the board for the Woods County Wheat Grower’s Association and hosted the OSU Test Plot Tour in Woods County for over forty years. In 1996, he was selected as Master Agronomist by the OSU Agronomy Department, which has been bestowed on only two individuals each year since 1961. Wesley was a man of few words, but when he spoke, people listened. He was a family man, working hard to provide but always making time to attend the events of his children, grandchildren, and great-grandchildren. He knew when to work and when to take a break, always taking a day of rest on Sunday to attend church with his family, and on the spur of the moment after harvest, would tell his family to pack up for a traveling adventure. His favorite place to be was on the tractor or driving around looking at the wheat fields, which he was able to do one last time on the 70th Anniversary of his marriage to Towanda. Wesley is survived by two daughters, Barbara Holman and husband, Bob, of Prague, Oklahoma, and Charlene Bradt-Rohrer and husband, Lynn, of Buffalo, Oklahoma; 6 grandchildren, Lana Rainwater and husband, Robbie, of Guthrie, Brinae Holman of Telluride, Colorado, Dr. Joseph Holman and wife, Lindsay, of Prague, Jerad Bradt and wife, JoDe, of Alva, Nick Bradt and wife, Cara, of Alva, and Lisa Bradt of Brooklyn, New York; 12 great grandchildren, Braylon Bradt, Brickman Bradt, Hailey Rainwater, Jace Rainwater, Joplin Bradt, Finn Holman, Breaker Bradt, Memphis Bradt, Thatcher Holman, Abbott Holman, Jac Rainwater, and Murphy Holman; other relatives and friends. Memorial contributions may be made through the funeral home to The Alva First United Methodist Church.

Send flowers to the Mallory family.