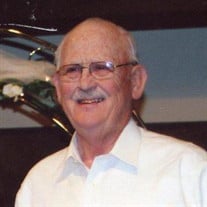 A memorial graveside service for Charles “Charlie” Miller will be 2:00 p.m. Monday, May 18, 2020, at the Alva Municipal Cemetery with Rev. John Clapp and Reverend Kevin Williams officiating. Inurnment is under the direction of Marshall Funeral Home of Alva. Charles Miller was born to Harry Watson Miller and Jessie Kimmel Miller on the family farm in Jetmore, Kansas, on November 14, 1933. He passed away peacefully at his home on Thursday, May 7, 2020, surrounded by his family. Charles attended school in Jetmore and graduated highschool in Jetmore, Kansas. He was united in marriage to Margaret Haney on January 12, 1954. To this union two children were born, a son, Curtis, and a daughter, Cheryl. Charles was drafted into the Navy in 1955. He was stationed in Hawaii as a parachute rigger. He was honorably discharged in 1957. After his discharge, he and Margaret made their home in Sterling, Kansas, where he worked for Darnell Furniture. In 1961, they moved to Alva where he continued to work for Darnell Furniture in the newly opened Alva store. After a few years, he opened his own floor covering store, Miller Interiors, and later added Steamway of Alva to his business. In 1984, while continuing to run his business, he began working for Alva Schools as a bus driver, a job he thoroughly loved, retiring after 36 years. In 1989 he was united in marriage to Rita Arndt and they made their home in Alva. He enjoyed attending local basketball and football games, and loved watching the Oklahoma City Thunder. He was an accomplished pianist and enjoyed playing for himself and others, including the residents at Beadles Nursing Home. Besides his parents, he was preceded in death by his wife, Margaret; two brothers, Howard Miller and Paul Miller; and one sister, Helen Miller. Charles is survived by his wife of 30 years, Rita, of the home; his son, Curtis Miller and wife, Jo, of Sayre; his daughter, Cheryl Knox and husband, Steve, of Alva; Rita’s children, Shelley Glenn and husband, Joel, of Valley Center, Kansas, and Rick Galbreath of Dacoma; his grandchildren, Adam Miller and wife, Dominique, of Moore, Kimberly Williams and husband, Kevin, of Elk City, Van Johnson and wife, Brittany, of Balko; and Brooke Crawford and husband, Tyler, of Alva, Brandon Glenn and wife, Lindsay, of Goddard, Kansas, Joshua Glenn and wife, Diana, of Valley Center, Kansas, Chelsey Barnhart and husband, Dakota, of Rose Hill, Kansas, and Ericka Boblett and husband, Tim, of Neosho, Missouri; nine great-grandchildren; other relatives and friends. Memorial contributions may be made through the funeral home to Faith Hospice of Alva.

A memorial graveside service for Charles &#8220;Charlie&#8221; Miller will be 2:00 p.m. Monday, May 18, 2020, at the Alva Municipal Cemetery with Rev. John Clapp and Reverend Kevin Williams officiating. Inurnment is under the direction of... View Obituary & Service Information

The family of Charles "Charlie" Miller created this Life Tributes page to make it easy to share your memories.

A memorial graveside service for Charles “Charlie” Miller will...