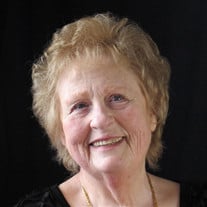 Funeral services for Charlotte Swain will be 2:00 p.m. Monday, February 3, 2020, at the Church of the Nazarene with Rev. Brady Marston and Rev. William Kalfas officiating. Interment will be in the Alva Municipal Cemetery under the direction of Marshall Funeral Home of Alva. Charlotte Ann (Hiett) Swain, daughter of the late Charley Franklin and Mary Ruth (Beadles) Hiett, was born February 1, 1941, in Woods County, Oklahoma, and passed away January 28, 2020, at Oklahoma City, at the age of 78 years, 11 months, and 27 days. Charlotte graduated from Alva High School in 1959 and also from St. Francis in Wichita in 1964 with her nursing degree. She later received her BSN from Northwestern Oklahoma State University in 1987. She was Director of Nurses for over 40 years at their family owned nursing home, Beadles Nursing Home. In 1967, she was united in marriage to Robert Travis Huckabee. To this union two children were born: David and Janice. She later married LeRoy Swain in 1988. She was a member of the Church of the Nazarene and was very active teaching Sunday School, VBS, Caravans, and Teen Quizzing. She enjoyed working with the teens and was in the church choir and sang many specials. Charlotte enjoyed traveling with family and collecting Santas but her life’s passion was nursing. Besides her parents, Charley and Ruth, she was preceded in death by her husband, Roy Swain; her daughter, Janice Terres; an infant brother, Billy Dean Hiett; her brother, Marion Hiett; her sister, Emma Jordan; two grandchildren, Ashleigh and Amber Huckabee; and her nephew, Robbie Lynch. Charlotte is survived by her son, David Huckabee and wife, Michelle, of Alva; two grandchildren, Austin Huckabee of Tulsa and Kaitlyn West and husband, Ethan, of Freedom; three step grandchildren, Jordana Waugh, Jerren Waugh, and Jaden Waugh; two great grandchildren, Kaiden West and Hunter West; five step great grandchildren, Brynley Roadenbaugh, Chayton Hudson, ElizaBeth Waugh, Stetson Waugh, and Cope Waugh; a sister, Marietta Lynch and husband, Doug of Alva; a sister in law, Barbara Hiett of Alva; two nephews, Adam Jordan and wife, Dayna, and Michael Jordan and partner, Corey, and their daughter, Libby, of Oklahoma City; great nephews, Blake Jordan and wife, Nissi, and their boys of Alva, and Seth Jordan and wife, Allison, of Macau, China; other relatives and friends. Memorial contributions may be made through the funeral home to Beadles Nursing Home Activity Fund. Anyone coming to the service please wear blue in Charlotte’s memory.

Funeral services for Charlotte Swain will be 2:00 p.m. Monday, February 3, 2020, at the Church of the Nazarene with Rev. Brady Marston and Rev. William Kalfas officiating. Interment will be in the Alva Municipal Cemetery under the direction... View Obituary & Service Information

The family of Charlotte Ann Swain created this Life Tributes page to make it easy to share your memories.

Funeral services for Charlotte Swain will be 2:00 p.m. Monday,...

Send flowers to the Swain family.