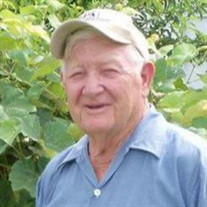 Graveside services for Chester Henry Shelite will be 2:00 p.m. Monday, January 11, 2021, at the Capron Cemetery with Rev. Drew Kirtley officiating. Interment is under the direction of Marshall Funeral Home of Alva. Chester Henry Shelite, son of the late Henry Rudolph and Myrtle (Shurts) Shelite, was born May 28, 1929, in Kiowa, Kansas, and passed away January 6, 2021, at Attica, Kansas, at the age of 91 years, 7 months, and 3 days. Chet graduated from Sharon High School in Sharon, Kansas. He proudly served his country in the United States Army. He worked at the Gyp Mill at Medicine Lodge, Kansas and the Santa Fe Railroad prior to moving to Alva where he worked in the Maintenance Department at Northwestern Oklahoma State University. He was at NWOSU from 1965 – 1980. Chet moved to Elkhart, Kansas and worked for Elkhart Public Schools until his retirement in 1984. He was a member of the Alva Moose Lodge and held the position of Governor at one point. He enjoyed gardening, cooking, and farming. Besides his parents, he was preceded in death by six siblings, Mary Shedd, Richard Shelite, Robert Shelite, Mildred Tate, Velma Haas, and Everette Shelite, as well as a granddaughter – Dallas Woods and two great-grandsons, Trace Baker and Josiah McCaskill. Chet is survived by five children, Chester James Shelite of Alva, Jackie McCaskill and husband, Dan, of North Berwick, Scotland, Barbara Mahon and husband, Don, of Alva, Alice Putnam and husband, Roger, of Alva, and Michelle Shelite of Freedom; and one brother, Lawrence Shelite of Alva. Also surviving are 14 grandchildren, Eric Shelite, Jeff McCaskill, Lisa Wetzel, Stewart McCaskill, Donny Mahon, Jeremy Mahon, Lacy Bynum, Wade Woods, Jonie Martin, Chandra Murrow, Cynthea Baker, Caleb Murrow, Sabra Kimery, and Shandi Haight; 31 great-grandchildren; 2 great-great-grandchildren; other relatives and friends. Memorial contributions may be made through the funeral home to the Oklahoma Medical Research Foundation or the Children’s Miracle Network.

The family of Chester Henry "Chet" Shelite created this Life Tributes page to make it easy to share your memories.

Graveside services for Chester Henry Shelite will be 2:00 p.m....

Send flowers to the Shelite family.