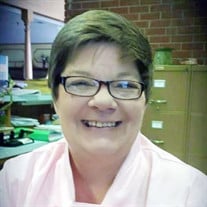 Christin Lynn Parkhurst, daughter of Art and Maxine (Pollock) Parkhurst was born October 11,1956 in Alva, Oklahoma. Waiting for her at home were three protective brothers Pat, Mike, and Steve. Eight years later, her sister, Ann Michele (Mickey), would complete their family. Chris passed away at the age of 63 on Saturday, July18th, 2020 at the South Oklahoma Heart Hospital in Oklahoma City. Chris grew up in Alva. She attended elementary school in Alva including Sacred Heart Catholic Grade School. She graduated from Alva Senior High School in 1974. She was proud to be a Goldbug! After a year of attending Northwestern Oklahoma State University, Chris began her forty-year career at Share Medical Center. During her time at SMC, Chris and her friend, Rita Goodrich, had a small catering service. They provided meals and desserts for many local special occasions. Chris was well respected in the Alva community and by the Share Medical Center staff. After her retirement, Chris soon moved to Yukon to live with Mickey and her son, Dash. It was three older brothers who were Chris’s protectors early in life, but it was her younger sister who became Chris’s protector and most fierce advocate. Mickey and Dash were with Chris during countless hospital stays and medical procedures. They were instrumental in getting Chris to and from dialysis appointments. Mickey and Dash cared tirelessly for Chris until her passing. Chris was known for her coconut cream pies and bierocks. She was an avid reader. She loved fishing. She encouraged family and friends by posting beautiful pictures and good morning posts on Facebook. She will be cherished for her beautiful smile and infectious laugh. Chris is preceded in death by her parents and her oldest brother, Donald Patrick. She is survived by her sister-in-law, Susan Parkhurst of Scottsdale, Arizona, her two brothers, Mike and his wife Leslie of Guymon and Steve and his wife Elizabeth of Alva, and one sister, Mickey of Yukon. Chris is survived by her aunt Norma Stein of Wichita, Kansas, and her uncle Lynn Pollock (her middle name namesake) of Cherokee. Chris was most proud of her nieces and nephews, Scott Parkhurst of Moore; Megan Parkhurst, and Makala Augerot of Guymon; Erin Matthews of Grapevine, Texas; Eric Parkhurst of Wichita, Kansas; and Dash Parkhurst of Yukon. She is survived by nine great nieces and nephews, other relatives, and numerous friends. A celebration of life service for Chris will be held at 10:00 am on Saturday, July 25th at Marshall Funeral Home in Alva, Oklahoma. Memorial contributions may be made through the funeral home to the Alva Educational Foundation (make checks to CFO for AGEF).

The family of Christin Lynn Parkhurst created this Life Tributes page to make it easy to share your memories.

Send flowers to the Parkhurst family.