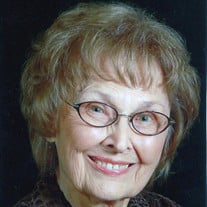 Funeral services for Christina Bixler will be 1:00 p.m. Tuesday, March 5, 2019, at the Marshall Funeral Home Chapel with Rev. Michael Taylor and Derrick Thomas officiating. We will be rejoicing in music with Ken Reich. Interment will be in the Alva Municipal Cemetery under the direction of Marshall Funeral Home of Alva. Christina was born to Harry and Anna Whittet on a snowy winter night on December 20, 1922, in Dacoma, Oklahoma. She left this earth to her heavenly home March 2, 2019, at the age of 96 years, 2 months, and 12 days. Christina grew up in the depression years on a farm near Dacoma under the loving guidance of her dear parents whom she deeply loved and respected. She helped her mother plant gardens and spent hours riding horses and helping her dad with the chores. She attended a country grade school, many times walking those two miles. Those walks are when she first developed her love of nature, wild flowers, and birds along the way. She graduated from Dacoma High and Northwestern State College in Alva. On March 8, 1942, she married Verle R. Bixler in Wichita, Kansas, where they lived until September of that year when Verle enlisted in the United States Marine Corps. They lived in San Diego, California, where Verle was stationed for four years. Upon his discharge in 1946, they moved back to Alva where he was engaged in farming and ranching. Verle and Chris were foster parents to Rene Andre from the Baptist Children’s Home during his high school years. They also opened their home to International Students through the BSU as well as participating in the Home Away From Home Program. Their home was also opened to Christina’s father who lived with them 13 years after Chris’ mother’s death—and with no regrets. Chris and Verle were active members of the First Baptist Church where they helped sponsor many youth retreats during the years their children were growing up. They were lifetime members of Gideon’s International and delivered Bibles to schools, hospitals, and wherever needed. They also supported several children in Haiti through Feed the Children. Chris also worked with Franklin Graham’s Operation Christmas Child. Her love for God and nature, her flower garden, and the song of birds were all expressed in her talent of painting. She enjoyed remembering others with her greeting cards designed with her trusty paint brush. The Bible, always open, placed on the kitchen table was a great source of comfort and hope. Besides her parents, she was preceded by her long time friend and soul-mate, Verle, went on to live with Jesus in 1998, and their precious daughter, Gina, joined him there in 2013. Christina is survived by her children, Vickie Eshleman and husband, Jerry, of Cherokee, and her son, Dick Bixler and wife, Nancy, of Pratt, Kansas; her son-in-law, Porter Rogers of Oklahoma City; five grandchildren, Tina Buck and husband, Mark, of Medicine Lodge, Troy Eshleman and wife, Christina, of Cherokee, Matt Bixler of Freedom, Jessica Sutton of Edmond, and Justin Rogers, and wife, Megan, of Cashion; seven great grandchildren, Joshua Buck and wife, Jill, Taylor Buck, Savanna Eshleman, Kacie Eshleman, Gibson Rogers, Blayze Sutton, and Mattie Bixler; two great-great-grandchildren, Palmer Buck and Wade Buck; other relatives and friends. She leaned on many Bible promises as in Matthew: If God sees the sparrow fall, paints the lilies short and tall, gives the sky their azure blue, will He not then care for you? A Bible verse she leaned on in 3rd John: “I have no greater joy than this to know that my precious family are living their lives in the Lord.” Memorial contributions may be made through the funeral home to Oklahoma Medical Research Foundation for Diabetes research.

Funeral services for Christina Bixler will be 1:00 p.m. Tuesday, March 5, 2019, at the Marshall Funeral Home Chapel with Rev. Michael Taylor and Derrick Thomas officiating. We will be rejoicing in music with Ken Reich. Interment will be in... View Obituary & Service Information

The family of Christina Bixler created this Life Tributes page to make it easy to share your memories.

Funeral services for Christina Bixler will be 1:00 p.m. Tuesday,...

Send flowers to the Bixler family.