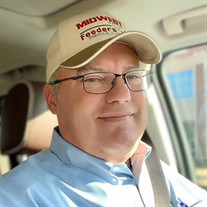 Christopher Edward Thomas, the son of Donald and Karen (Hart) Thomas, was born on July 9, 1974, in Alva, Oklahoma. As a man of adventure, he passed away on November 14, 2020, at the age of 46 while hunting with friends outside of Dodge City, Kansas. He graduated from Alva High School in 1992. Chris attended Northeastern Oklahoma A&M College and Oklahoma State University, where he graduated with Agricultural Economics/ finance minor from both universities. Chris reflected that his college years were some of the best times of his life as we meet such an outstanding network of friends and agricultural pillars. He later received his Master’s Degree from the Graduate School of Banking in Colorado. On December 26, 1998, he and Tara (Bisel) Thomas were united in marriage in Cripple Creek, Colorado. To this union, their only child, Falynn Thomas, was born on October 4, 2010. Chris worked for Alva State Bank for 26 years. He was very dedicated to his work and treasured his clients and bank family. He loved to help people! He dedicated himself to farmers and agri-businessmen throughout the region. Chris was known by all for his smile, sense of humor and his genuine kindness. He had a niche for getting to know people, a trait his father Don taught him to understand at an early age. Chris also treasured his friends! He made each feel special in a way that no other did. He remembered details, and enjoyed reaching out to encourage, taunt and joke. He had a mischievous side that enjoyed a good prank, picture or enhanced story. He is survived by his wife, Tara Thomas and daughter, Falynn of the home; his parents, Donald and Karen Thomas of Alva, OK; his brother, Timothy Thomas and nephews, Brayden and Zachery of Alva, OK; Grandmother, Leona Thomas of Woodward, OK; Father and Mother-in-law, Kelly and Melody Bisel, Ames, OK; Sister-in-law, Traci Gosney and husband Travis and children Tarren, Tori and Tucker Jack (TJ) of Enid, OK; many aunts, uncles and cousins, and countless longtime friends. He was preceded in death by his maternal grandparents, Leonard and Winnie Hart, and paternal grandfather, Arley Edward Thomas. A Celebration to honor Chris’s life will be held this coming spring. Contributions may be made to the Alva 4-H, or FFA Booster Club, or The Christopher Thomas Memorial Scholarship in care of Marshall Funeral Home of Alva, PO Box 804, Alva, OK 73717.

Christopher Edward Thomas, the son of Donald and Karen (Hart) Thomas, was born on July 9, 1974, in Alva, Oklahoma. As a man of adventure, he passed away on November 14, 2020, at the age of 46 while hunting with friends outside of Dodge City,... View Obituary & Service Information

The family of Christopher Edward Thomas created this Life Tributes page to make it easy to share your memories.

Christopher Edward Thomas, the son of Donald and Karen (Hart)...

Send flowers to the Thomas family.