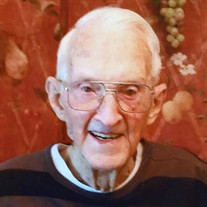 Funeral services for Clarence Edward “Corky” Sampson will be 2:00 p.m. Saturday, October 15, 2016, at the Waynoka First Baptist Church with Rev. David Shaw and Pastor Brian Holland officiating. Interment will be in the Waynoka Municipal Cemetery under the direction of Marshall Funeral Home of Waynoka, LLC. Clarence Edward “Corky” Sampson, son of the late Axel Frederick and Eva (Carlson) Sampson, was born May 28, 1919, at Miami, Iowa, and passed away October 12, 2016, at his home in Waynoka, at the age of 97 years, 4 months, and 14 days. Corky’s mother passed away when he and his sister were very young and they were raised by their uncle and aunt, Charlie and Agnes Sampson from the age of 5. He attended school at Heman. He joined the Civilian Conservation Corps and served for one year in California. On April 22, 1940, he was united in marriage to Mildred May Hartley at Alva, Oklahoma. They lived in Iowa for one year, then moved to Waynoka where he worked as a switchman for the Santa Fe Railroad for 38 years. At the age of 8, he was baptized at the Long Creek Baptist Church in Woodward County. He was a member of the Waynoka First Baptist Church, the Senior Citizens Center, and the Saddleclub. He enjoyed fishing, quail hunting, playing horseshoes, and dominos. Besides his parents, he was preceded in death by his twin sister, Viola Jones; his cousins he thought of as brothers, Oscar, Carl, Lawrence, Herman, and Charlie. Corky is survived by two daughters, Sandra Olson and husband, Terry, of Mustang, Arlene Hughes and husband, Gerald, of Verden; two sons, Danny Sampson and wife, Lois, of Arkansas City, Kansas, and Darrel Sampson and wife, Pam, of Plover, Wisconsin. Also surviving are ten grandchildren, Debbie Davenport, Kurt Olson and wife, Debbie, Janiece Landry and husband, Allen, Pam Shade and husband, Robert, Janelle Loafman and husband, Rob, Jennifer Dykes and husband, Anthony, Matt Sampson and wife, Deanna, Jeff Sampson and wife, Darci, Travis Sampson, and Rachelle Price and husband, Eric; 17 great grandchildren and 4 great-great grandchildren; other relatives and friends. Memorial contributions may be made through the funeral home to the Oklahoma Medical Research Foundation for Alzheimer’s research.

The family of Clarence Edward "Corky" Sampson created this Life Tributes page to make it easy to share your memories.

Funeral services for Clarence Edward “Corky” Sampson will be...

Send flowers to the Sampson family.