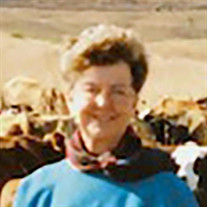 Claris Joan Hutchison left her earthly home on April 29, 2020 at the age of 86 years, 11 months and 4 days. She was the last daughter born to the late T. A. and Clara (Neighbors) Dwyer on May 24, 1933. She was laid to rest with immediate family surrounding her on May 4, 2020, with Rev. Wendie Jencks-Wilson officiating. Joan married L. W. (Bud) Hutchison on January 12, 1950, in Waynoka and soon after they moved to Grenola, KS, where they ranched together until his death in 1997. Joan loved cooking, fishing, working on the ranch, sewing for her children and grandchildren, creating beautiful quilts and dancing to good country music. She was a member of the Grenola United Methodist Church and a supporter of the Grenola Sr. Citizens Center. On February 20, 2005, Joan married LeRoy Terry in Grenola, KS. They shared her home there until her health created the need for her to move to Howard. Joan spent her last months being cared for by Rob and Kristin, her son and daughter-in-law. Survivors include her sons, Larry (Linda) Hutchison of Waynoka, OK; Rob (Kristin) Hutchison of Howard, Ks; and daughters, Marilyn Hutchison of Oklahoma City, OK; Sue (Lynn) Whipple of Waynoka, OK; nine grandchildren, Lori (Brett) Sample; Rebecca Hutchison-Miller, Lindsay (Bart) Seaman, all of Waynoka; Megan (Mike) Amash, Parkville, MO; Leah (Andrew) Zimmer, Nashville, TN; Stacy (Kyle) Howeth, Oklahoma City, OK; Grant (Kyra) Whipple, Fairview, OK; Julie (Kory) Johnson of Helena, OK and Sarah Whipple of Waynoka. She was especially proud of her great- grandchildren; Sarah (Chris) Castillo, Rylee Sample; Lainey, Alivia and Remington Seaman; Derik Miller; Emmeline, Cecilia, and Vivienne Amash; AnnaCate, Isabella and Anderson Howeth; Madalynn and Taybor Whipple and Kuff Johnson. Her first great-great grandson is due in June. Joan was preceded in death by her husband and parents, along with brothers, Frank Dwyer, Howard Dwyer, Bud Dwyer, Jerry Dwyer and sisters Nita Dwyer, Marvel Sale, Martha Steele, and Betty Cox. She was also preceded by her infant great grandson, Zachary Chance Stinson. Funeral arrangements were made in conjunction with the Howard Funeral Home and Marshall Funeral Home of Waynoka, LLC. Interment was in the Waynoka Municipal Cemetery. Memorial contributions may be made through the funeral home to the Grenola Senior Citizens.

Claris Joan Hutchison left her earthly home on April 29, 2020 at the age of 86 years, 11 months and 4 days. She was the last daughter born to the late T. A. and Clara (Neighbors) Dwyer on May 24, 1933. She was laid to rest with immediate family... View Obituary & Service Information

The family of Claris Joan Hutchison created this Life Tributes page to make it easy to share your memories.

Send flowers to the Hutchison family.