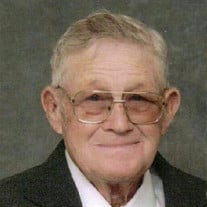 Funeral services for Clyde Eugene Chaffin will be 2:00 p.m. Saturday, December 21, 2019, at the Alva Church of God with Rev. Bob Brown officiating. Interment will be in the Garrison Cemetery near Dacoma under the direction of Marshall Funeral Home of Alva. Clyde Eugene Chaffin, son of the late Ernest Stanley and Anna Velma (Bergner) Chaffin, was born July 2, 1934, near Dacoma, and passed away December 17, 2019, in Enid, Oklahoma, at the age of 85 years, 5 months, and 15 days. Clyde attended the Friendship School and graduated from Dacoma High School in 1952. On December 21, 1955, he was united in marriage to Patricia Joan (Tinker) Chaffin in Freedom. They first made their home near Dacoma and later moved to Alva where he worked at John Deere and the Oklahoma State Highway Department until he retired. He also farmed and ranched his entire life. He was a member of the Alva Church of God. He really enjoyed his wheat farming, cattle raising and going to auctions. He loved spending time with his family, especially the grandkids and great grandkids, and really enjoyed playing secret Santa over the phone with nieces and nephews. The Chaffin family reunions were special, treasured times. Besides his parents, he was preceded in death by his wife, Patricia; two brothers, Charles Chaffin and Carl Leonard Chaffin; two brothers-in-law, Frank Shankle and Ned Cook; and three nephews, Dan Allen Chaffin, Kenneth Shankle and Kyle Kirkpatrick. Clyde is survived by one son, Doug Chaffin and wife, Susan, of Alva; one daughter, Gayla Becker and husband, Bud, of Enid; three brothers, Dean Chaffin and wife, Lola, of Mojave, California, Harry Chaffin and wife, Karin, of Palmyra, Nebraska, and Louis Chaffin and wife, Cindy, of Tahlequah and four sisters, Mary Shankle of Hulbert, Oklahoma, Geraldine Yochum and husband, Paul, of Tahlequah, Oklahoma, Dorothy Gilliam and husband, Gary, of Tahlequah, and Lynda Cook of Hulbert. Also surviving are four grandchildren, Greg Chaffin and wife, Kim, of Marion, Arkansas, Jeremy Chaffin and wife, Kasey, of Ada, Dustin Chaffin and wife, Harley, of Perryville, Missouri, and Zach Chaffin and wife, Jennifer, of Alva; five great grandchildren, Drake, Gregory, Brenden, Owen, and Mason; other relatives and friends. Memorial contributions may be made through the funeral home to the Hospice Circle of Love.

Funeral services for Clyde Eugene Chaffin will be 2:00 p.m. Saturday, December 21, 2019, at the Alva Church of God with Rev. Bob Brown officiating. Interment will be in the Garrison Cemetery near Dacoma under the direction of Marshall Funeral... View Obituary & Service Information

The family of Clyde Eugene Chaffin created this Life Tributes page to make it easy to share your memories.

Funeral services for Clyde Eugene Chaffin will be 2:00 p.m. Saturday,...

Send flowers to the Chaffin family.