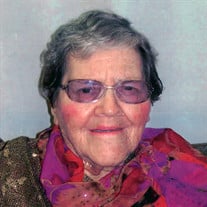 Daile Alpha Neuenschwander Sacket, 90, was born July 2, 1927, in Knowles, OK, to Emil and Viola (Watters) Neuenschwander, and went to her heavenly reward October 27, 2017, in Alva. Daile was the ninth of thirteen children, ten of whom lived to adulthood. She attended a country school until her senior year when she moved to Alva with her twin sister Doris. After graduation, she attended Bethany Peniel College in Bethany, OK, and then Northwestern State College in Alva. On March 28, 1956, she married Loren Sacket. Daile became an instant mother to Loren’s three children, at first having them in the summer, and then as they became old enough, each chose to come to Alva to live with Loren and Daile. Through the years, she earned their love, and they came to consider her as “Mom.” Shortly after marriage, they purchased the Alva Mattress Factory where she worked during the day, and in the evening, they delivered the mattresses. In 1962, she began working at Beadles Nursing Home until retiring in 1999. Daile loved cooking and baking, but making candy became her passion. She made candy for all her family and friends for Christmas. Her peanut butter fudge, cherry mashes, toffee, peanut butter balls, and Baby Ruth candy bars were some of her family’s favorites. She was known around Alva as the “Candy Lady.” She also enjoyed making quilts with her sister Lucy. They spent many hours completing as many as sixteen quilts a year. She was a faithful member of the Alva Church of the Nazarene where she was very involved in the Nazarene World Missionary Society. Daile was preceded in death by her husband of thirty years, Loren; her parents; brothers Jake, Jonas, Carl, Bert, and Emil Neuenschwander, Jr.; sisters Lydia Rose, Betty and Mary Neuenschwander, Ruth Ikler, Doris Bradshaw, Cora Mae Sugart, and Lucy Arndt; grandchildren Terry, Cindy, and Carla Leech and two great-grandchildren. She is survived by daughter Reva Leech of Great Bend, KS, sons Richard Sacket and wife Marjorie of Yukon, and Wayne Sacket and wife Vicki of El Reno; eight grandchildren: Connie Daniels of Manhattan, KS, Toby, Christy, Todd, and Tyler Leech of Great Bend, KS, Kimberlee Thomas of Annville, Pennsylvania, Steven Sacket and wife Denise of Edmond, and Brian Sacket and wife Julie of Piedmont; nineteen great-grandchildren: Derek Daniels and wife Elizabeth, Kendra and Jalissa Daniels, Zachary Daniels and wife Mariah; Morris, Adrueonia, Amanda, Rochelle, Seth, Kaidyn, Madison, Dalton, Christopher, and Kourtney Leech; Tiffany Thomas; Hayley, Brady, Sean, and Sydney Sacket; seven great-great-grandchildren: Ta’Tiana and Richard Gray, Derek (D.J.), Quinton, and Bishup Daniels; Jada and Jersey Leech; and numerous nieces and nephews. Four of those nieces: Newanta Kilmer, Carla Smart, Zeona McKinley, and Diana Arndt work at Beadles Nursing Home and lovingly cared for Daile during the last seven years of her life. The family wishes to thank them and all the other staff at Beadles for all they did to make Daile’s life as comfortable as possible. Memorial contributions may be made through the funeral home to the Beadles Nursing Home Activity Fund.

Daile Alpha Neuenschwander Sacket, 90, was born July 2, 1927, in Knowles, OK, to Emil and Viola (Watters) Neuenschwander, and went to her heavenly reward October 27, 2017, in Alva. Daile was the ninth of thirteen children, ten of whom lived... View Obituary & Service Information

The family of Daile Alpha Sacket created this Life Tributes page to make it easy to share your memories.

Send flowers to the Sacket family.