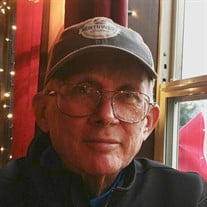 Memorial services for Dale Boyce will be 1:00 p.m. Friday, April 20, 2018, at the Wentworth Chapel with Reverend Kirk Board officiating. Inurnment will follow in the Carmen City Cemetery under the direction of Wentworth Mortuary, Carmen. Dale Edward Boyce was born on August 11, 1954, the youngest of three children of Jim and Evelyn (Brooks) Boyce, and passed away on March 24, 2018, in Richland, Washington. He was raised in Carmen, Oklahoma, graduating as the Valedictorian of the 1972 class of Carmen-Dacoma High School. He grew up participating in cub scouts, boy scouts, and little league baseball. His first job in Carmen was throwing the Enid Morning News and the Enid Daily Eagle newspapers. In later years he worked as a lifeguard at the Carmen swimming pool. Dale graduated from Northwestern State College in 1975 with a Mathematics/ Chemistry/ Physics triple major. During the summer of 1974, he worked for Argonne National Laboratory in Chicago in the Chemical Engineering Division of their Undergraduate Research Program. After his graduation from Northwestern in 1975, he moved to Chicago, Illinois, where he had been accepted as a laboratory assistant at the Enrico Fermi Institute working under Anthony Turkevich, Professor of Chemistry. He applied for and was accepted into a graduate study program at the University of Chicago, Physical Sciences Program, doing graduate study in nuclear chemistry. Dale’s career at the University of Chicago led him to be employed as a Radiation Safety Officer and ultimately appointed as the Director of Radiation Safety for the University. His tenure in Chicago lasted 25 years and in 1999 he made the decision to accept a position as health physicist and radiation safety officer for International Isotopes, Inc. In Denton, Texas. In 2005, Dale took a leap of faith and accepted a job as Senior Health Physicist and Radiation Safety Officer for Isoray Medical Services in Richland, Washington. Isoray was a new, start-up company doing research and development and production of radioisotope seeds for brachytherapy cancer treatment. It would turn out to be Dale’s dream job. Dale was preceded in death by his parents, Jim and Evelyn Brooks Boyce and his oldest sister, Mareitta Jo Boyce Cox. Dale is survived by his sister, Elaine Boyce Moser and her husband, Earl; their daughter, Stephanie Moser Goins and her husband, Lance, and son, Alexander Goins; their son, Justin Moser and his wife, Emily. Also surviving are his nephew, Karl Cox; niece, Karen Cox Anderson and her daughter, Taylor Anderson Conklin and family, and son, Cory Anderson. Memorial contributions in memory of Dale may be made to the Carmen Library.

Memorial services for Dale Boyce will be 1:00 p.m. Friday, April 20, 2018, at the Wentworth Chapel with Reverend Kirk Board officiating. Inurnment will follow in the Carmen City Cemetery under the direction of Wentworth Mortuary, Carmen. Dale... View Obituary & Service Information

The family of Dale Edward Boyce created this Life Tributes page to make it easy to share your memories.

Memorial services for Dale Boyce will be 1:00 p.m. Friday, April...

Send flowers to the Boyce family.