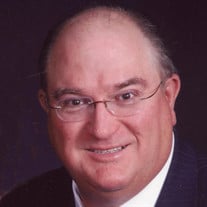 Funeral services for Danny Gene Lohmann will be 2:00 p.m. Saturday, June 6, 2020, at the Zion Lutheran Church with Pastor Randy Foote officiating. Services are under the direction of Marshall Funeral Home of Alva. Danny Gene Lohmann, son of Alice (Pfeiffer) Lohmann Chaffin and the late Edgar Theodore Lohmann, was born September 20, 1954, in Alva, Oklahoma, and passed away March 28, 2020, at his home at the age of 65 years, 6 months, and 7 days. Danny was baptized at the Zion Lutheran Church in Alva on October 10, 1954. He attended kindergarten at Horace Mann Elementary School in Alva, then attended Zion Lutheran School from the 1st through the 4th grade. He then attended Alva public school and graduated high school with the Class of 1972. He attended NWOSU and graduated in 1976 with a BS degree. He received a law degree in 1992 from OCU. On October 8, 1971, he married his high school sweetheart and love of his life, Nieta R. Abbott in Alva. Danny was a well respected lawyer and dedicated much of his practice to helping poor and deprived clients often without pay. He worked for the Oklahoma Indigent Defender System for over 15 years and was a prosecutor for nearly 5 years. He began his private practice in 2012, and worked as long as he was able. Danny served as president of the congregation of St. John’s Lutheran Church in Moore, Oklahoma and served as vice president of the Zion Lutheran Church in Alva. He also served on the Board of Directors of the Oklahoma District LCMS and as a District Reconciler. He was preceded in death by his father, Edgar. Danny is survived by his wife, Nieta Lohmann, of Aline; two daughters, Daneece Foth and husband, Cory, of Peabody, Kansas, and Amy Erikson and husband, H. Clint, of Capron; his mother Alice Chaffin of Alva; and one brother, Eddie Lohmann and wife, Nancy, of Enid. Also surviving are four grandchildren, Cierra Goodwin and husband, Zachary, of Peabody, Kansas, Madyson Foth of Peabody, Kansas, Ruston Erikson and Tanith Erikson, both of Capron; other relatives and many dear friends. Memorial contributions may be made through the funeral home to Zion Lutheran Church Evangelism Fund, the Lutheran Hour Ministries, or the American Cancer Society in Oklahoma.

The family of Danny Gene Lohmann created this Life Tributes page to make it easy to share your memories.

Funeral services for Danny Gene Lohmann will be 2:00 p.m. Saturday,...

Send flowers to the Lohmann family.