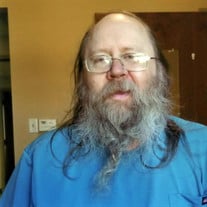 Memorial services for David Hogan will be at a later date. Cremation arrangements are under the direction of Marshall Funeral Home of Alva. David Wayne Hogan, son Patsy Ruth (Boner) Hogan and the late Cordell Ira Hogan, was born March 21, 1964, at Beaumont, Texas, and passed away October 29, 2020, at Alva, Oklahoma, at the age of 56 years, 6 months, and 8 days. David attended school in Medford. After school he was a handyman and drove a delivery truck. He enjoyed writing music and playing his guitar, cooking, and growing a garden. He lived in Melder, Louisiana, before moving to Alva to be near his mother. As he gave in life he continued in death by being an organ donor. He was preceded in death by his father. David is survived by his mother, Ruth Hogan-Welborn of Alva; his daughter, Abigail “Abby” Hogan of Baton Rouge, Louisiana; one brother, John Hogan and wife, Linda, of Seattle, Washington; two sisters, Elizabeth Guffy and husband, Mark, of Byron, and Melanie Hogan of Gilmer, Texas; other relatives and friends. Memorial contributions may be made through the funeral home to Beadles Nursing Home Activity Fund.

The family of David Wayne Hogan created this Life Tributes page to make it easy to share your memories.

Memorial services for David Hogan will be at a later date. Cremation...

Send flowers to the Hogan family.