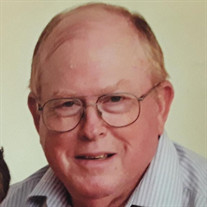 Funeral services for David Walter Like will be 11:00 a.m. Friday, December 24, 2021, at the Elm and Murrow Church of Christ in Waynoka with Bill David Walker officiating. Interment will be in the Waynoka Municipal Cemetery under the direction of Marshall Funeral Home of Waynoka, LLC. David Walter Like, son of Walter and Flossie (Hanan) Like, was born March 21, 1949, in Waynoka, Oklahoma, and passed away December 21, 2021, in Oklahoma City, Oklahoma, at the age of 72 years and 9 months. David grew up in the Waynoka area and graduated from Waynoka High School with the Class of 1967. He graduated from Oklahoma State University with a degree in Electronic Engineering. On August 20, 1971, he was united in marriage to Sharon Ann McNally in Waynoka. They moved to Albuquerque, New Mexico, where he worked at the Sandia National Lab. After his retirement, he moved to Alva and recently back to Waynoka. He was a member of the Elm and Murrow Church of Christ. He enjoyed fishing, camping, and especially entertaining his grandkids and following their activities. He was a huge OSU fan. Besides his parents, he was preceded in death by his wife, Sharon; one niece, Shereena Montano; one brother-in-law, Robert McNally, and two sisters-in-law, Enola Like and Darlene Like. David is survived by one son James Walter (JW) Like and wife, Tammy, of Byers, Kansas; two daughters, Jacinda Perot and husband, Mike, of Waynoka and Cathy Trujillo of Alva; one brother, Roscoe Like of Waynoka; one nephew, Melvin Like and wife, Kelly, of Waynoka; one niece, Barbara Baird and husband, Alan, of Pflugerville, Texas; one sister-in-law, Karen Tucker and husband, Mark, of Burlington. Also surviving are seven grandchildren, Veronica Seidel and husband, Brady, of Pratt, Kansas, Drexyel Nelson of Pratt, Kansas, Kapri and Emry Like, both of Byers, Kansas, Joey Trujillo and Michael Martinez of Alva, and Robert Perot of Waynoka; one great grandchild, Jet Wilder Seidel; other friends and relatives. Memorial contributions may be made through the funeral home to the Silver Maple Camp or Lariat Creek Christian Camp.

Funeral services for David Walter Like will be 11:00 a.m. Friday, December 24, 2021, at the Elm and Murrow Church of Christ in Waynoka with Bill David Walker officiating. Interment will be in the Waynoka Municipal Cemetery under the direction... View Obituary & Service Information