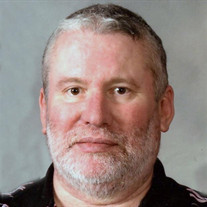 Memorial services for David Gregory Smart will be 3:30 p.m. Sunday, June 11, 2017, at the Marshall Funeral Home Chapel. He was cremated at his request under the direction of Marshall Funeral Home of Alva. David Gregory Smart, son of Donald R. Smart and the late Marilyn Lou (Cathy) Smart, was born November 21, 1963, in Liberal, Kansas, and passed away May 29, 2017, at Alva, Oklahoma, at the age of 53 years, 6 months, and 8 days. David lived in Liberal until they moved to Alva in 1972 where he worked with his mother and sister at the Smart School of Dance. He then started work in the farming and ranching business. He loved to work with cattle and the land. He graduated from Alva High School with the Class of 1982 and went on to OSU Okmulgee, graduating with an associate degree in electrical engineering. During his time in college, he drove race cars at Enid with his brother in Smart Brothers Racing. On January 16, 1988 he was united in marriage to Carla Doreen Arndt. In 1997, he moved to Illinois and began working in the Right of Way business with his brother in law, Kevin Darbe and his dad, where they traveled all over the United States talking with land owners and would buy and lease their land. He always said that if you could get them to laugh, you could get them to sign the deal. He retired in 2010 due to health issues. He enjoyed going to the races in Enid watching his nephew race and then later to the GoCart Races here in Alva. He enjoyed his grandchildren and loved to be with them. He was preceded in death by his mother, Marilyn Smart. David is survived by his wife, Carla, of Alva; two daughters, Bonnie Tune and husband, Jeremy, of Dallas, Texas, and Daniella Watkins of Oklahoma City; one son, Zachary Smart of Alva; his father, Donald Smart of Alva; his sister, Lisa Darbe and husband, Kevin of Edmond; his brother, Tim Smart and wife, Greg, of Alva; four grandchildren, Kendi, Damien, and Brooklyn of Alva, and Aiden of Oklahoma City; other relatives and friends. Memorial contributions may be made to the funeral home in memory of David.

The family of David Gregory Smart created this Life Tributes page to make it easy to share your memories.

Memorial services for David Gregory Smart will be 3:30 p.m. Sunday,...

Send flowers to the Smart family.