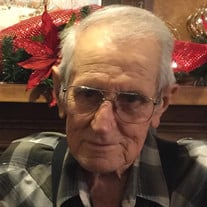 Funeral services for Delfred Inman will be 2:00 p.m. Sunday, October 1, 2017, at the Elm and Murrow Church of Christ in Waynoka with Bill David Walker officiating. Interment will be in the Waynoka Municipal Cemetery under the direction of Marshall Funeral Home of Waynoka, LLC. Delfred Inman, son of the late Thomas Jefferson and Beulah Avon (Brown) Inman, was born July 2, 1923, at Togo in Major County, Oklahoma, and passed away September 27, 2017, at Fairview, Oklahoma, at the age of 94 years, 2 months, and 25 days. Delfred attended the Togo School through the 8th grade and graduated from Cheyenne Valley High School. On July 14, 1943, he was united in marriage to Ila Harmon at Alva. He served in the United States Army in the Iwo Jima campaign and was ready to invade Japan when the bomb was dropped on Hiroshima. After his service he moved back to Major County where he farmed and ranched. He was also in the trucking and dozer business. They moved to Waynoka for several years, then to Madill, then back east of Bouse Junction. Besides his parents, Delfred was preceded in death by one son, Darral Lee Inman; 5 brothers, Gene, R.J., Lilburn, Gerald Dean, and an infant; one sister, Ines Bouse; and one grandson, Keith Inman. Delfred is survived by his wife of 74 years, Ila, of Fairview; three children, Judy Barnett and husband, Darral, of Cherokee, Raymond Inman and wife, Pam, of Dacoma, and Tim Inman and wife, Sharon, of Cherokee; his daughter-in-law, Donna Inman of Edmond; and four sisters, Virginia Harmon, Ardena Bartlow, Susie Sutherland, and Darlene Lyon. Also surviving are 13 grandchildren, Stacie Wrobbel and husband, Derek, Krista Blaser and husband, Kyle, Kelli Schenk and husband, Ryan, Shawna Clepper, Brandon Barnett and wife, Jonni, Rodney Barnett, Rod Inman, Ricky Inman and wife, Beddy, Robby Inman and wife, Allison, Scott Inman and wife, Brandy, Sabrina Watson and husband, Dallas, Mendee Dice and husband, Austin, and Jarrod Inman and wife, Sammi; 35 great grandchildren; other relatives and friends. In lieu of flowers, memorial contributions may be made through the funeral home to the Oklahoma Medical Research Foundation for cancer research or the Elm and Murrow Church of Christ.

Funeral services for Delfred Inman will be 2:00 p.m. Sunday, October 1, 2017, at the Elm and Murrow Church of Christ in Waynoka with Bill David Walker officiating. Interment will be in the Waynoka Municipal Cemetery under the direction of Marshall... View Obituary & Service Information

The family of Delfred Inman created this Life Tributes page to make it easy to share your memories.

Send flowers to the Inman family.